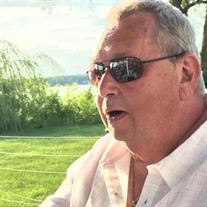 Hendrik Cornelius Tjeert Vaandrager died on September 15, 2020 of natural causes. He was born in the Netherlands (Holland) in 1947 on February 19 to Hendrik and Alida (Spanjer) Vaandrager. He immigrated with his parents and brother Nicolaas in April of 1960 to Rensselaer, Indiana. Henk graduated from Rensselaer High School in 1966 after which he enrolled in Valparaiso University. Henk returned to Holland to visit his grandparents. During this time, he was drafted into the U.S. Army. Henk took his army physical at The Hague in the Netherlands and returned to the United States to report to Fort Campbell for basic training. He served in Germany for two years of his military tour. Following his time in the U.S. Army, Henk relocated to the San Francisco Bay Area where he eventually settled in a career in the garment industry as a general manager for Eileen West. During this time he met his partner, David Denzel. After David's death in 2005, Henk moved to Boise, Idaho where he lived for ten years with Diana Lees, his friend and a sister to his partner, David. Henk leaves to mourn his passing, his brother, Nick and sister-in-law, Mary Ellen Vaandrager from Lowell, Indiana, his nieces, nephew, and their families; Jacqueline (Vaandrager) and Jon Stepanovich of Keller, Texas, Caroline (Vaandrager) and Dustin Pittman of Renton, Washington, Nicolaas Vaandrager and his fiancé, Kimi Ratto of San Francisco, California. Henk will be laid to rest in Memory Gardens in Rensselaer, Indiana.

Hendrik Cornelius Tjeert Vaandrager died on September 15, 2020 of natural causes. He was born in the Netherlands (Holland) in 1947 on February 19 to Hendrik and Alida (Spanjer) Vaandrager. He immigrated with his parents and brother Nicolaas... View Obituary & Service Information

The family of Hendrik Cornelius Tjeert Vaandrager created this Life Tributes page to make it easy to share your memories.

Send flowers to the Vaandrager family.