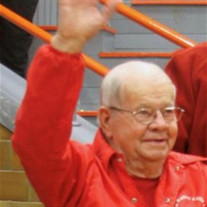 Henry Ganzeveld, age 86 of DeMotte, Indiana passed away Monday, September 2, 2019 at Methodist Southlake hospital. Henry was born in Evergreen Park, Illinois on December 5, 1932 to William and Sophie (Torrenga) Ganzeveld. He was a graduate of Wheatfield High School, Class of 1950. Henry married the love of his life, Marlene Hamstra, on May 1, 1959 in DeMotte, Indiana. He was a bricklayer in the Bricklayers Union, a veteran of the U.S. Army, and a member of First Christian Reformed Church. Henry enjoyed fishing and sports. He was a coach for over 25 years for the Little League. Henry is survived by his wife: Marlene Ganzeveld of DeMotte, IN; children: Sandra (John) Hufnagel of DeMotte, IN; Scott (Shelley) Ganzeveld of DeMotte, IN; Steve Ganzeveld of Monon, IN; 9 grandchildren: Nicole, Sophie, and Maggie Hufnagel; Steven, Sarah, Megon, and Ashley Ganzeveld; Casey Hennings; Josie Lucas; great-grandchild: Marlena Rose Washington. Henry is preceded in death by his parents and brother, John Ganzeveld. Friends may call at the First Christian Reformed Church in DeMotte on Thursday, September 5, 2019 from 9:00 - 11:00 AM. Funeral services will immediately follow at First Christian Reformed Church on Thursday at 11:00 AM with Pastors Jim Alblas and Laryn Zoerhof officiating. Interment will be held at Holland Cemetery. Memorial contributions may be made to donor’s choice

The family of Henry Ganzeveld created this Life Tributes page to make it easy to share your memories.

Send flowers to the Ganzeveld family.