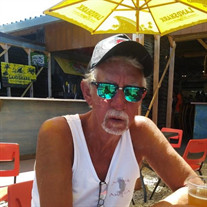 Herman L. “Butch” Woudema, age 71, of Wheatfield, passed away on Monday, May 4, 2020 in St. James City, Florida. He was born January 1, 1949, in Rensselaer, Indiana, the son of Herman Sr. and Dorothy (Musch) Woudema, both deceased. Butch married the love of his life, Tina Gard, on December 22, 2010 in DeMotte. He served in the United States Army in the 82nd Airborne and was a member of the American Legion Post #136 in St. James City, Florida. Butch retired from Town & Country paving where he was a truck driver. He enjoyed racing, fishing, spending time with friends, and wintering in Florida with his wife. Butch is survived by his wife, Tina Woudema; children: Rodney Woudema, Eric Woudema, Holly Gilbert, Dion Woudema, Dane Woudema, Shelby Gault; 13 grandchildren and sister, Elizabeth “Pat” Valade. A Celebration of Life will be held at the Wheatfield American Legion on Friday, July 17, 2020 from 4:00 – 8:00 PM.

The family of Herman L. "Butch" Woudema created this Life Tributes page to make it easy to share your memories.

Send flowers to the Woudema family.