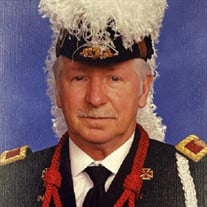 Irvin L. Bitting, age 87, of DeMotte, passed away Friday, March 4, 2022 at Franciscan Health Crown Point. Irvin was born on February 25, 1935 in Pryor, Oklahoma the son of Bill and Delpa Bitting, both deceased. He graduated from Ballard Memorial High School in LaCenter, Kentucky before joining the United States Air Force. He served from 1953-1957. Irvin was a pipefitter with Inland Steel from 1959-1991 when he retired. He married Doris Jean Criswell on March 6, 1982 in Lake Village, Indiana. She preceded him in death on January 1, 2012. Irvin was a dedicated member of the Freemasonry organization holding all officer positions and served as the WM for several years at both the McKinley Lodge #712, Hammond and the Prairie Lodge #125, Rensselaer. His titles include: Master Mason in 1960 and member of Prairie Lodge #125 10x Past Master, Knighted as a Sir Knight 12-15-1984, Past Grand Commander of Knights Templar of the state of Indiana 2000-2001, Past Grand Inspecting General of the Grand Commandery of Knights Templar of the state of Indiana, Past Governor of the York Rite Sovereign College, Past Director of Yeoman of York, Recipient of Order of Purple Cross, Past sovereign Master of AMD, Past Patron of the Order of Eastern Star, Past Prior of KYCH, Full member of Valparaiso York Rite, Grotto Merou Past Monarch, Full Member of Orak Shrine, Full Member of Knight Mason, Legion of Honor Honorary Demolay, Full Member of Scottish Rite, Member of Red Cross Constantine, and Member of the Holy Royal Arch Knight Templar Priests. Irvin is survived by his children: Cherryl (Brett) Sneed of Franklin, TN; Bill (Tammy) Bitting of Bellevue, NE; James (Beth) Beam of Montgomery, AL; 8 grandchildren, 5 great-grandchildren; and 3 sisters: Bertha Eubanks, Zona Pippen, and Billie Gouffer. He is preceded in death by his parents, wife, daughter Monica Scalf, and son Scott Beam. There are no services for Irvin at this time. There will be a graveside service with honors in early June at the Roselawn Cemetery. Memorial contributions may be made in Irvin’s name to the Shriners Hospital for Children. Jackson Funeral Service of DeMotte has been entrusted with the families wishes.

The family of Irvin L. Bitting created this Life Tributes page to make it easy to share your memories.

Send flowers to the Bitting family.