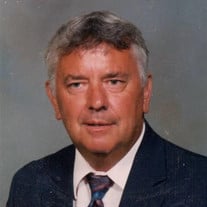 Jack A. Eldridge, age 78 of Rensselaer, Indiana passed away Monday, July 17, 2017 at the University of Chicago Medical Center. Jack was born in Rensselaer, Indiana on December 21, 1938, the son of late Thomas R. and Marguerite (nee Daugherty) Eldridge. Jack was a lifetime resident of Rensselaer and on August 1, 1964 in Rensselaer, he married Janice Zeigler who survives. He graduated from Rensselaer Central High School, the Class of 1957. A lifetime farmer, Jack also worked as a salesman for John Deere Implement for 29 years. He was a veteran of the United States Army and was stationed in Germany. He is a member of the Trinity United Methodist Church and the American Legion, Post #29. Jack loved life and had many hobbies. He enjoyed horse racing and wintering in Florida. He was the kind of man who could spark up a conversation with anyone and never met a stranger. He loved and cared for his family and spending time with them was most important. He had a knack for truly being a “Jack” of all trades. Jack is survived by his loving wife of 52 years, Janice; two daughters, Kelli (David) Rhoades of Wheatfield, Indiana & Heidi Eldridge-Bray of Lafayette, Indiana and one son, George ( Rhonda) Eldridge of Rensselaer. Also surviving, 5 grandchildren, Gentry Brown, Jordan & Jessica Rhoades, Brittnee & Garett Eldridge; 2 great-grandchildren, Owen & Piper; one surviving sister, Clara Nitzschke, Vancouver, Washington; sisters-in-law, Mary Jane & Ruby Eldridge; brothers-in-law, Jay Critser and LaVerne “Chub” Meyer. He was preceded in death by his parents, sisters, Cornelia (George) Sigman, Emma Jane (Robert) Darrow, Marcella (Byrom) Phegley, Nancy Meyer, Ardis Critser, infant sister Louella and brothers, Tom, Roger, Richard and Joe Eldridge. Friends are invited to visit with family on Friday, July 21, 2017 at Jackson Funeral Chapel in Rensselaer from 2:00 to 8:00PM. Funeral services with Military Honors will be held on Saturday, July 22, 2017 at 10:30AM at Jackson Funeral Chapel with Pastor John Hostetter officiating. Interment will be held at Weston Cemetery at a later date. Memorials may be made in memory of Jack Eldridge to the Ronald McDonald House.

Jack A. Eldridge, age 78 of Rensselaer, Indiana passed away Monday, July 17, 2017 at the University of Chicago Medical Center. Jack was born in Rensselaer, Indiana on December 21, 1938, the son of late Thomas R. and Marguerite (nee Daugherty)... View Obituary & Service Information

The family of Jack A. Eldridge created this Life Tributes page to make it easy to share your memories.

Jack A. Eldridge, age 78 of Rensselaer, Indiana passed away Monday,...

Send flowers to the Eldridge family.