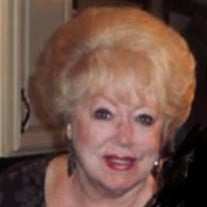 Jacqueline Mueller, peacefully passed away on Tuesday, January 22nd, 2019 at 79 years old in Demotte, Indiana. She was born January 21st, 1940 in Rockford, Illinois to William and Ruby (Mitchell) Schupbach. Jacqueline graduated from Rockford High School. At 16, she was married to the late Ronald Ulrich and 4 children were born from this union. After his untimely passing in 1977, Jacqueline met and married Donald Mueller and celebrated 35 years of marriage. She retired from her beauty salon, The Arrangement, in Hammond, Indiana and with her husband, moved to enjoy acres of land and a quiet life in Medaryville and then Demotte, IN. Jacqueline was a devoted wife. Donald wishes it to be in her obituary that she was the best wife a Man could ask for. Jacqueline Mueller leaves behind her children: Blayne Ulrich of Florida; Jaime Ulrich of Crown Point, IN; Lynlee Ulrich of Hammond, IN; and Todd Ulrich of Chesterton, IN. Stepchildren: Linda and Laura; 6 grandchildren: Stephanie, Keri, Samantha, Emily, Leah and Lexy; And 11 great-grandchildren. Jacqueline was a private person, so no wake or services will be held. Her ashes will be placed on her memorial at Chapel Lawn Memorial Garden in St. John, IN. In lieu of flowers, Jacqueline would like a home cooked meal to Don so that she knows he is being taken care of. Tributes may be made at Jackson Funeral Chapel of Demotte at https://www.jacksonfuneral.com/

The family of Jacqueline Joyce Mueller created this Life Tributes page to make it easy to share your memories.

Send flowers to the Mueller family.