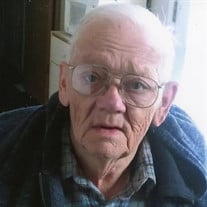 James “Keith” Franks, age 75, of Rensselaer, passed away Thursday, February 20, 2020 at the Indiana Veteran’s Home in West Lafayette, Ind. The son of James & Juanita (Shirley) Franks, he was born on May 4, 1944 in Marion County, Alabama. Keith attended the Brilliant, Alabama public schools. On April 14, 1967, he married Adele Hope Frailey, who passed away on December 20, 2009. Then, on May 4, 1967, James enlisted in the United State Army and served his county during the Vietnam War. He was honorably discharged on December 10, 1968. After his military service, Keith went to work for the Ford Motor Company, where he worked on the assembly line and drove vehicles off the line. He retired after 13 years of employment. Keith was affiliated with the Baptist Church and was a past member of the American Legion. He is survived by three children, Teresa Winter of Rensselaer, Joanne (Ronald) Monroe of Wheatfield and Loretta Franks of Rensselaer. Also surviving are ten grandchildren and eleven great-grandchildren. He was preceded in death by his parents, is wife, Adele and one brother. Friends are invited to visit with family on Saturday, February 29, 2020 from 9:00AM to 1:00PM at Jackson Funeral Chapel in Rensselaer. Funeral services will be held immediately following at 1:00PM at Jackson Funeral Chapel with Rev. James Blanchard officiating. Interment will follow at Memory Gardens of Rensselaer with full military rites. The family requests any memorial contributions in Keith’s name be made to the Disabled American Veterans at www.dav.org or procuring an envelope at Jackson Funeral Chapel.

The family of James Keith Franks created this Life Tributes page to make it easy to share your memories.

Send flowers to the Franks family.