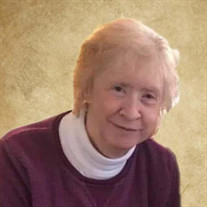 Janet Marie Dumas, 78, of Rensselaer, IN, passed away on August 30, 2021 at St. Vincent Hospital in Indianapolis. Janet was born in Rensselaer, IN on October 19, 1942, the daughter of Max E. and Lurretta R. (Harrington) Stowers. Janet graduated from Fair Oaks High School with the class of 1960. She married the love of her life, Louis M. Dumas on February 24, 1968 in Rensselaer, IN and he survives. Janet was primarily a homemaker but also held jobs at Schumacher Electric and the local telephone company over the years. She was currently a member of Trinity United Methodist Church of Rensselaer and a past member of Brushwood United Methodist Church. Janet enjoyed playing board games, card games and doing puzzles. She also loved to read. She especially loved playing and spending time with her grandchildren. She will be missed dearly by her family and community. Janet is survived by her husband, Louis; children, Amy Renee Dumas of Wheatfield, IN and Chad Louis (Rebecca) Dumas of Fair Oaks, IN; grandchildren, Karrington, Rachel, Cortnie, Hunter, Morgan, Richard, Alexandra, Makennah, and Emma; great grandchildren, Levi, Logan, Daniel, Blake, Wyatt, and Nora; siblings, Barbara (Dale) Streitmatter of Rensselaer, IN, Maxine (Larry) Pass of Demotte, IN, Manly Stowers of Rensselaer, IN, Phyllis Britt of Rensselaer, IN, and Ruth (Ron) Niketh of TX. Janet was preceded in death by her parents, Max and Lurretta, an infant daughter, Michelle Dumas, and a brother, Jerry Stowers. Friends may call upon the family at Jackson Funeral Chapel from 9:00-11:00 a.m. on Wednesday, September 8, 2021. A Memorial Service will be held immediately following at 11:00 a.m. at Jackson Funeral Chapel of Rensselaer with Pastor Susan Martin officiating. Interment will take place at Memory Gardens in Rensselaer. Memorial contributions may be made to the Trinity United Methodist Church of Rensselaer.

Janet Marie Dumas, 78, of Rensselaer, IN, passed away on August 30, 2021 at St. Vincent Hospital in Indianapolis. Janet was born in Rensselaer, IN on October 19, 1942, the daughter of Max E. and Lurretta R. (Harrington) Stowers. Janet graduated... View Obituary & Service Information

The family of Janet Marie Dumas created this Life Tributes page to make it easy to share your memories.

Janet Marie Dumas, 78, of Rensselaer, IN, passed away on August...

Send flowers to the Dumas family.