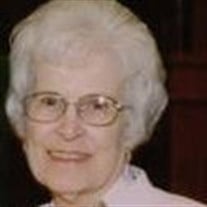 Jean E. Melcher Buchko, age 92, of Valparaiso, IN passed away Monday, August 14, 2017 at Brookdale Memory Care. She was born January 4, 1925 in Terre Haute, IN to Sam and Bessie (Murphy) Stewart. Jean married Donald E. Melcher on March 17, 1944 in Colorado Springs, CO who passed on August 19, 1995. She later married Alex Buchko on August 16, 1997 in Valparaiso, IN and he preceded her in death on March 19, 2014. Upon graduation from high school, Jean attended beauty school. She retired as a hairdresser. Jean was a member of First Baptist Church of Wheatfield. She traveled in their RV from Texas to Oklahoma. Jean liked knitting, crocheting, and needle point. She enjoyed spending time with her family. Jean is survived by her children: Dr. D. Robert (Barbara) Melcher of Stockton, IL; Susan (Stephen) Deardorff of Wheatfield, IN; Gary (Betty) Melcher of Valparaiso, IN; 11 grandchildren and 15 great-grandchildren and one on the way. Jean was preceded in death by her parents; husbands; son, Carl Melcher; 3 sisters & 3 brothers. Friends may call at the Jackson Funeral Service of DeMotte on Saturday, August 19, 2017 from 9:00 to 11:00 AM. A Memorial Service will follow at 11:00 AM with Pastor Don Gear officiating. Interment will be held at Memory Gardens of Rensselaer. In lieu of flowers, memorial contributions may be made to the Alzheimer’s Association. To share a memory with the Melcher Buchko family, please visit www.jacksonfuneral.com

The family of Jean E. Melcher Buchko created this Life Tributes page to make it easy to share your memories.

Jean E. Melcher Buchko, age 92, of Valparaiso, IN passed away...