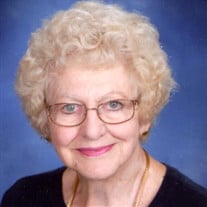 Jeanette May Ewen, age 89, of Rensselaer, IN passed away September, 14, 2017, in her home surrounded by her loving family. Jeanette was the daughter of Ralph and Bessie (Kinder) Lottes of Crown Point, IN. Jeanette was born March 6, 1928, in Crown Point, IN, at the farm homestead where she lived until she married Harry Ewen. Jeanette met Harry at the monthly Rural Youth meetings which were held in different towns. They married on March 14, 1953. They started off in Texas when Harry was drafted into the Army at Ft. Hood, TX. Upon his discharge from the Army they moved to Griffith, IN where they raised their nine children until 1970, when they built their dream home in Rensselaer, IN. Jeanette was a member of the Trinity United Methodist Church. She loved spending time with her family. She also loved animals, gardening, shopping, flea markets and reading. Jeanette is survived by eight of her children, Lynne Zingg, Lynda Ewen, Michael Ewen, Debra (Scott) VanMeter, and Sandra Ewen all of Rensselaer, James Ewen of Lafayette and Judy Thomas and Larry (Lisa) Ewen of Wolcott, twenty-four grandchildren and sixteen great-grandchildren. Also surviving are siblings Joyce Wiggs and Donald (Norma Jean) Lottes, sister-in-law Lois Lottes all of Crown Point and sister-in-law Dorothy Sapper from Hobart as well as many nieces and nephews. She is preceded in death by her parents, husband, daughter Kathy Schultz and granddaughter Katelyn Longstreth. Friends are invited to visit with the family at Jackson Funeral Chapel of Rensselaer on Monday, September 18, 2017 from 2:00 to 8:00 P.M. Funeral services will be held at 10:30 A.M. Tuesday, September 19, 2017 at the Trinity United Methodist Church in Rensselaer with Dr. James Blanchard officiating. Burial will follow at Memory Gardens Cemetery. Memorials may be made to the Trinity United Methodist Church, Rensselaer, IN or Franciscan Health Rensselaer Home Healthcare and Hospice.

Jeanette May Ewen, age 89, of Rensselaer, IN passed away September, 14, 2017, in her home surrounded by her loving family. Jeanette was the daughter of Ralph and Bessie (Kinder) Lottes of Crown Point, IN. Jeanette was born March 6, 1928, in... View Obituary & Service Information

The family of Jeanette May Ewen created this Life Tributes page to make it easy to share your memories.

Jeanette May Ewen, age 89, of Rensselaer, IN passed away September,...

Send flowers to the Ewen family.