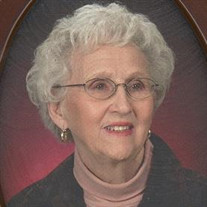 Jeanette H. Robinson, age 100, of Rensselaer, passed away peacefully on Friday, August 9, 2019 at the Rensselaer Care Center. She was born on the family farm in Jasper County, Indiana on December 9, 1918, the daughter of the late Fred J. and Coletta (Kohley) Feldhaus. Jeanette was a lifetime resident of Rensselaer. After graduating from Fair Oaks High School, the Class of 1936, she married Byron Matthew on January 29, 1938, who preceded her in death. Her second marriage was to Kenneth M. Robinson on June 26, 1947 and he passed away on June 22, 2001. Together, Jeanette and Ken owned and operated the former Westside Grocery and Garden Shop in Rensselaer for many years. After selling the store, Jeanette was a full-time mother and also worked in the bookstore at St. Joseph’s College for 18 years. Jeanette was a member of the St. Augustine Catholic Church where she served with the St. Augustine Christian Women. She was a former member of the Jasper County Hospital Auxiliary, Sigma Phi Gamma sorority, the Rensselaer Art League, a longtime member of Curtis Creek Country Club and was a St. Joseph’s College Fellow. Ken and Jeanette have two loving daughters with whom they cherished and they became the best mother and father anyone could wish for. Together, they all traveled and took numerous family vacations that left many treasured memories. Ken and Jeanette also loved spending time with extended family and friends. Jeanette is survived by daughters, Susan (Gary) Schiavone of DeMotte and Rebecca Hurley of Rensselaer; two sisters, Genevieve Clark and Betty (George) Tonner, both of Rensselaer; six grandchildren, two great-grandsons and one great-granddaughter. She was preceded in death by her parents, her husbands, one brother, Gerald, three sisters, Marie Courtright, Geraldine Dill and Anita Fedewa. Friends may visit on Tuesday, August 13, 2019 from 3:00 PM - 7:00 PM (CT) at the Jackson Funeral Chapel of Rensselaer with a Rosary service at 7:00PM. A Funeral Mass will be held on Wednesday, August 14, 2019 at 10:00 AM at St. Augustine Catholic Church with Father Don Davison officiating. Interment will follow at Mt. Calvary Cemetery in Rensselaer. The family requests memorials be made In Jeanette’s memory to St. Augustine Catholic School.

Jeanette H. Robinson, age 100, of Rensselaer, passed away peacefully on Friday, August 9, 2019 at the Rensselaer Care Center. She was born on the family farm in Jasper County, Indiana on December 9, 1918, the daughter of the late Fred J. and... View Obituary & Service Information

The family of Jeanette H. Robinson created this Life Tributes page to make it easy to share your memories.

Send flowers to the Robinson family.