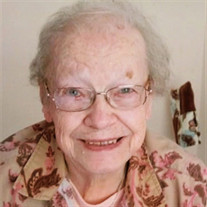 Jeanne E. Snyder, age 99, of Rensselaer, Indiana passed away Wednesday, November 13, 2019 at Cumberland Pointe in West Lafayette, IN, where she resided for the past five years. Jeanne was born on August 24, 1920 in Buchanan, Michigan. She is the daughter of Willis L. and Olive F. (Walker) Bowron. Jeanne attended South Bend Catholic schools, and was also home schooled. She married William “Bill” J. Snyder on April 7, 1947 at Holy Cross Church in South Bend, Indiana. He preceded her in death on December 20, 2014. Jeanne worked at various grocery stores before she retired. She was affiliated with St. Augustine Catholic Church of Rensselaer. She was a charter member at Pantry Pals Home Ec. Club, a past member of Knights of Columbus Auxiliary, St. Augustine Christian Woman, and the former Jasper County Hospital Auxiliary. She liked watching sports on TV, especially the Chicago Cubs and Bears and Notre Dame football. She remained a loyal Fighting Irish fan even when she moved into the heart of Boilermaker country. Jeanne also enjoyed sewing and crafts. While residing at Cumberland Pointe, she took up painting. Several of her paintings won Blue Ribbons in the Senior Division at the Tippecanoe County Fair. Jeanne is survived by her children: Mary Yoder of Estelline, South Dakota; Frances (Roger) Howard of Elkhart, IN; Margaret (Abe) Garber of Goshen, IN; Joseph (Linda) Snyder of Crown Point, IN; Rita (Denny) Alfrey of Syracuse, IN; Virginia (Randy) Koch of Mishawaka, IN; Jill (Bill) Andres of Monticello, IN; Nancy (Dave) Walter of Rensselaer, IN; Daniel (Darlene) Snyder of Goshen, IN; 18 grandchildren and 28 great-grandchildren, and 1 great-great grandchild born the day after she passed away. Jeanne is preceded in death by her parents, husband, infant daughter, Sandra, siblings: Virginia Whitford and Dan Bowron, and son-in-law, Wayne Yoder. A Mass of Christian Burial will be held on Friday, November 22, 2019 at 11:00 AM at the St. Augustine Catholic Church with Father Don Davison officiating. Interment will follow in the Mt. Calvary Cemetery. Memorial donations may be made to the Parkinson’s Foundation or the St. Augustine Catholic School.

Jeanne E. Snyder, age 99, of Rensselaer, Indiana passed away Wednesday, November 13, 2019 at Cumberland Pointe in West Lafayette, IN, where she resided for the past five years. Jeanne was born on August 24, 1920 in Buchanan, Michigan. She... View Obituary & Service Information

The family of Jeanne E. Snyder created this Life Tributes page to make it easy to share your memories.

Send flowers to the Snyder family.