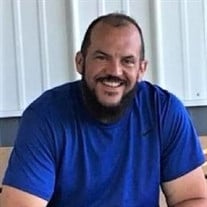 Jeffrey Thomas Goad, age 40, a lifelong resident of Rensselaer, passed away Thursday, December 13, 2018 at St. Vincent Hospital in Indianapolis. Jeff was born July 20, 1978 in Rensselaer, the son of Thomas Goad and Shirley Wiles-Dickinson. Jeff was a graduate of Rensselaer Central High School, Class of 1997. In 2002, he earned his Bachelors degree in accounting from Franklin College, where he played football. Jeff was employed as a field supervisor for Monsanto for over 10 years. He was an avid St. Louis Cardinals, Chicago Bears, and University of Michigan fan. Recently Jeff became a runner and participated in multiple half marathons. He was loved by many and was able to make everyone smile with his sense of humor. Jeff is survived by his parents: Thomas Goad of Rensselaer, IN; Shirley Wiles-Dickinson of Rensselaer, IN; sister: Kasey (Derek) Butler of DeMotte, IN; nephews Henry & Teddy Butler; and maternal grandmother: Ruth Wiles. Jeff is preceded in death by: paternal grandparents Roby & Margaret Goad, maternal grandfather: Robert Wiles; uncle: Fred Goad; and aunt: Sandra Bartenbach. Friends may call at Jackson Funeral Chapel of Rensselaer on Tuesday, December 18, 2018 from 2:00 until 8:00 PM. A Celebration of Life will be held at Jackson Funeral Chapel of Rensselaer on Wednesday, December 19, 2018 at 11:00 AM. Jeff would want everyone to be comfortable, so we welcome friends & family to wear their Chicago Bears, St. Louis Cardinals, or University of Michigan attire. In lieu of flowers, donations can be made to the Rensselaer Central High School Athletic Dept., c/o Rensselaer Central High School, 1106 E. Grace Street, Rensselaer, IN 47978. To share a memory with the Goad family, please visit www.jacksonfuneral.com

The family of Jeffrey Thomas Goad created this Life Tributes page to make it easy to share your memories.

Send flowers to the Goad family.