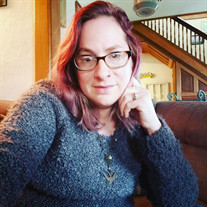 Jennifer “Jenny” Elise Pierson, 40, of Rensselaer, IN, passed away on October 5, 2021 at her residence surrounded by her loving family. Jenny was born in Indianapolis, IN on September 27, 1981, the daughter of Louis and Janet (Perkins) Gibson. Jenny attended Ivy Tech after graduating from high school, taking classes in early childhood development. She married the love of her life, Thomas Pierson on June 11, 2000 at Eagles Hideaway at Eagle Creek Park and he survives. Jenny was happy to be self-employed as a photographer. She also volunteered as a Court Appointed Special Advocate, helping many children and families in her community. Her spare time was spent on many activities, such as scrapbooking, painting, crafting, and refurbishing furniture. She had a love for all animals and a passion for anything to do with art. But most of all she loved spending time with her family and especially her husband and children. Jenny will be deeply missed by her family and friends. Jenny is survived by her loving husband, Thomas; sons, Corbin Pierson, Cameron Pierson, Cooper Pierson, Colton Pierson, and Chase Pierson; mother, Janet Perkins-Prather and stepfather, Larry Prather; stepmother, Diane Gibson; brothers, Jason Gibson and Jonathan Gibson; stepbrother, Thomas Spurlock; stepsister, Brittany Kantaskas; father-in-law, Thomas Allen Pierson and mother-in-law, Joyce Pierson. She was preceded in death by her father, Lewis Gibson; sister, Joy Gibson; and grandparents. Friends may call on the family on Sunday, October 17, 2021 from 2:00 PM to 5:00 PM at Jackson Funeral Chapel of Rensselaer. A Memorial Service will be held immediately following at 5:00 PM. Jackson Funeral Chapel of Rensselaer has been entrusted with the arrangements. Memorials may be made in memory of Jenny to Crossroads CASA, 910 S. Sparling Avenue, Rensselaer, IN 47978 and/or the Tri- County Schools.

Jennifer &#8220;Jenny&#8221; Elise Pierson, 40, of Rensselaer, IN, passed away on October 5, 2021 at her residence surrounded by her loving family. Jenny was born in Indianapolis, IN on September 27, 1981, the daughter of Louis and Janet (Perkins)... View Obituary & Service Information

The family of Jennifer "Jenny" Elise Pierson created this Life Tributes page to make it easy to share your memories.

Send flowers to the Pierson family.