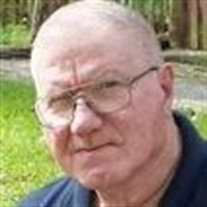 Jerry L. Sanders, 76, of Brook, was welcomed to Heaven by his Lord and Savior Jesus Christ on Friday, May 25, 2018, at his home. He was surrounded by his family in his final days. He was born on June 5, 1941, in Rensselaer, the son of the late Clayton and Mildred (Miller) Sanders. After graduation from Brook High School in 1960, Jerry enlisted in the United States Army for three years, serving 16 months in Korea. On June 27, 1965, Jerry was united in marriage to Arlene Wienrank at the Presbyterian Church of Goodland, with a reception at Foster Park. Jerry attended Hyles-Anderson College in Crown Point and became an ordained Baptist minister. He served in several churches both as a pastor and visiting speaker. He maintained the family heritage of working with timber, running a sawmill, logging and supplying firewood. After retirement from the wood business, he was in the camper transport business for many years. He was skilled in auto mechanics and carpentry and did much work in these areas for himself and to assist his family. He loved to study how things worked and be able to know how to put them together and repair them. He also enjoyed working in his woodshop making barn lumber furniture and doing projects for his children and grandchildren. The Lord blessed the marriage of Jerry and his loving wife Arlene with four daughters: Karen (Gary) Cooper of Brook; Lynnette (Paul) Scharf of Columbus, WI; Aimee (Joshua) Sayers of Edinburgh; and Rebekah Sanders of New Whiteland. Others left behind to cherish his memory include 13 grandchildren, Autumn (Nathan) Stratton of Monticello, Meagan Cooper of Brook, Kristen (James) Barth of Goodland, and Erin, Heather, Laura, Kara, Leah and Analise Cooper, all of Brook, Bridgette Brown of New Whiteland, and Benjamin, Carlene and Jenna Sayers of Edinburg; six great-grandchildren, Ryan, Owen, and Isabel Barth of Goodland, and Grady, Kaylie and Audrey Stratton of Monticello; brothers, Wayne (Nancy) Sanders of Monon, Billie Sanders of Rensselaer, Thomas (partner Linda) Sanders of Otterbein, and Gale (Crystal) Sanders of Brookston; sisters Janice Ferguson of Kokomo, Cheryl Miller of West Lafayette; many nieces and nephews, and many other relatives and friends. In addition to his parents, Jerry was preceded in death by his brother Keith Sanders, sister Pamela Sanders, brother-in-law Max Ferguson, sister-in-law Dawn Sanders and granddaughter Lainey Cooper. A memorial service for Jerry will be held at 10:00 a.m. on Wednesday, May 30, 2018, at Jackson Funeral Chapel of Rensselaer. Pastor Todd Poynter of Greenwood Bible Baptist Church will officiate with burial to follow at Goodland Cemetery. The Sanders family will greet relatives and friends from 4:00 to 8:00 p.m. on Tuesday, May 29, 2018, at the Jackson Funeral Chapel of Rensselaer. Memorials may be made to the Ronald McDonald House Charities, One Kroc Drive, Oak Brook, IL 60523. Jackson Funeral Chapel of Rensselaer has been entrusted with Jerry’s arrangements. Jerry’s family extends their heartfelt appreciation to friends and family for their help, visits and concern

Jerry L. Sanders, 76, of Brook, was welcomed to Heaven by his Lord and Savior Jesus Christ on Friday, May 25, 2018, at his home. He was surrounded by his family in his final days. He was born on June 5, 1941, in Rensselaer, the son of the... View Obituary & Service Information

The family of Jerry L. Sanders created this Life Tributes page to make it easy to share your memories.

Send flowers to the Sanders family.