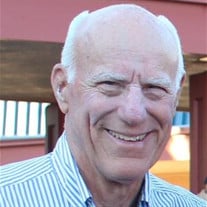 Jerry R. Snyder, age 86, formerly of Logansport, passed away on Sunday, December 9, 2018 in Naples, FL. Born April 30, 1932 in Young America, Jerry was the son of the late Dallas and Geneva Snyder. Jerry graduated from Lafayette Jeff High School. He was a member of Beta Theta Pi fraternity at Purdue University and graduated with a degree in business. Jerry was married to Barbara (Jackson) Snyder who passed away in 2000. Jerry and Barb lived, worked, and raised their family in Logansport before moving to Muncie where Jerry retired from GMAC after 35 years. In 2003, Jerry moved to Naples, FL where he had many friends and enjoyed golf, bridge, and dancing. He was a member of Calvary Presbyterian Church in Logansport and the First Presbyterian Church in Muncie. All his life, Jerry was an avid Purdue Boilermaker fan. Surviving are three sons, Brad (Amy) Snyder, Pleasanton, CA, Phil Snyder and Doug Snyder (Wendy Coulter), Chicago, IL: grandchildren: Alexandra and Trent Snyder, Kaitlyn Snyder, Kaya and Jackson Snyder; sister, Barbara Inskeep, Naples, FL; a niece, several nephews, great nieces and nephews. One brother, Jack, and his wife, Phyllis, preceded him in death. A memorial service will be August 17, 2019 in Culver, IN at Culver Academies Memorial Chapel, 1300 Academy Road, Culver, Indiana 46511.

The family of Jerry R. Snyder created this Life Tributes page to make it easy to share your memories.

Send flowers to the Snyder family.