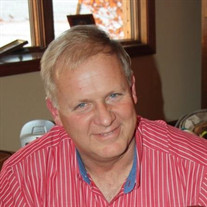 Jeryld A. Recker, age 63 of Fair Oaks, passed away at his home on Wednesday, September 12, 2018 surrounded by loved ones. He was born on October 30, 1954 in Rensselaer, Indiana the son of James and Angie (DeHaan) Recker, both deceased. Jerry attended Illiana Christian High School, Class of 1972. He married Luann Peterson on February 14, 1975 in DeMotte, Indiana. Jerry was a carpenter for Hollandale Builders until 1977, when he became a lifelong farmer. He was a charter member of Bethel Christian Reformed Church of DeMotte where he was an Elder and Deacon, part of the praise team, and worked the sound system. Jerry enjoyed farming, restoring muscle cars and tractors, snowmobiling with friends & family, watching sporting events-especially when his grandkids were playing, spending time with his family, and being involved in his church. Jerry is survived by his wife: Luann Recker of Fair Oaks, IN; children: Shelly (James) Broyles of DeMotte, IN; Stacy (Barry) Diener of DeMotte, IN; 5 grandchildren: Lexi and Zach Broyles, Gabbi, Avery, and Tristan Diener; brother: James (Susan) Recker of WI; sister: Janice LaMar of FL; brothers-in-law: Ken DeVries (Glenna) of DeMotte, IN; Marvin (Ruth) Peterson of DeMotte, IN; Dave (Pam) Peterson of DeMotte, IN; step-mother: Mary Recker of DeMotte, IN; many nieces & nephews. Jerry was preceded in death by his father, mother, and sister: Gayle DeVries. Friends and family may call at Jackson Funeral Service of DeMotte on Sunday, September 16, 2018 from 1:00 to 8:00 PM. Funeral services will be held at Bethel Christian Reformed Church of DeMotte on Monday, September 17, at 10:30 AM with Pastor Rick Vanderwal officiating. Interment will follow at Holland Cemetery. Memorial contributions may be made to DeMotte Christian School or Donor’s Choice. To send flowers or share a memory with the Recker family, please visit www.jacksonfuneral.com

Jeryld A. Recker, age 63 of Fair Oaks, passed away at his home on Wednesday, September 12, 2018 surrounded by loved ones. He was born on October 30, 1954 in Rensselaer, Indiana the son of James and Angie (DeHaan) Recker, both deceased. Jerry... View Obituary & Service Information

The family of Jeryld "Jerry" A. Recker created this Life Tributes page to make it easy to share your memories.

Send flowers to the Recker family.