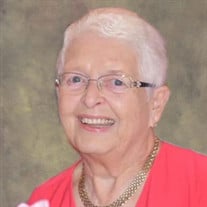 Joan Eileen Donovan, 87, of Rensselaer, IN, passed away on October 20, 2021 at Autumn Trace in Rensselaer. Joan was born in Tomah, WI on February 5, 1934, the daughter of John and Mildred (Wirth) Wiseman. Joan graduated from New Lisbon High School with the Class of 1951. She then attended and graduated from County Normal Teacher’s College in New Lisbon. She married the love of her life, John “Jack” H. Donovan on August 7, 1954 in New Lisbon, WI and he passed on April 26, 2013. Joan was happy to be homemaker, taking care of her household and family but she also worked at the former Falvey’s/Canaday’s men’s clothing store in Rensselaer, IN. She was a member of the St. Augustine Catholic Church and was an active volunteer within the church. In her spare time, she enjoyed golfing and playing Bridge. Joan and Jack loved spending time at Castle Rock Lake in Wisconsin. They called it their true home for over fifty-five years. They enjoyed dancing, camping, and simply being outdoors and enjoying their loving relationship. Joan will be deeply missed by her family and friends. Joan is survived by her children, Mark Donovan of Rensselaer, IN, Maureen (Ken) Healey of Rensselaer, IN, Anne (Mark) Koopman of New Haven, IN, John “Jack” (Sherri) Donovan of Rensselaer, IN, Mary (Rick) Burke of Florence, KY, Jane (Daryl) Yeoman of Logansport, IN; twelve grandchildren and nine great-grandchildren. She was preceded in death by her husband, Jack, one sister, one brother, and infant twins. Friends may call on the family on Sunday, October 24, 2021 from 2:00 PM to 5:00 PM at Jackson Funeral Chapel of Rensselaer. A Graveside Service will be held on October 25, 2021 at 1:00 PM at St. Paul’s Catholic Cemetery in New Lisbon, WI. Jackson Funeral Chapel of Rensselaer has been entrusted with the arrangements. Memorials may be made in memory of Joan to St. Augustine Catholic School or St. Augustine Catholic Church.

Joan Eileen Donovan, 87, of Rensselaer, IN, passed away on October 20, 2021 at Autumn Trace in Rensselaer. Joan was born in Tomah, WI on February 5, 1934, the daughter of John and Mildred (Wirth) Wiseman. Joan graduated from New Lisbon High... View Obituary & Service Information

The family of Joan Eileen Donovan created this Life Tributes page to make it easy to share your memories.

Joan Eileen Donovan, 87, of Rensselaer, IN, passed away on October...

Send flowers to the Donovan family.