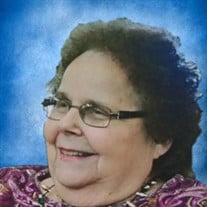 JoAnn Marie Brown, 86, formerly of Rensselaer, passed away Monday, February 22, 2021 in Lafayette, Indiana. JoAnn was born in Rensselaer on November 1, 1934, the daughter of Earl and Elizabeth (McFarland) Stalbaum. JoAnn graduated from Tefft High School with the Class of 1953. JoAnn worked at Per Pack in Foresman for 8 years, cleaning offices at the former Clinic of Family Medicine, and also as a homemaker. JoAnn married Donald Joseph Brown on June 9, 1956 in Rensselaer, Indiana and he preceded her in death on February 28, 2014. JoAnn enjoyed playing bunco and bingo, as well as spending time with her family and friends. JoAnn is survived by her children, Tammy (Jerry) Allen of Flora, IN, Kerry (Gena) Brown of Lafayette, IN; 7 grandchildren; 9 great grandchildren; sibling, Velma Whitaker of TN. JoAnn was preceded in death by her parents, her husband, Donald, and her son, Dale Brown. Friends may call upon the family at Jackson Funeral Chapel of Rensselaer on Saturday, February 27, 2021 from 9:00 am to 11:00 am CST. A Funeral Service will be held at Jackson Funeral Chapel of Rensselaer on February 27, 2021 at 11:00 am CST with Reverend Wayne Williams officiating. Interment will follow at Memory Gardens in Rensselaer. Jackson Funeral Chapel of Rensselaer has been entrusted with the arrangements. Memorial contributions may be made to Shriner’s Children’s Hospital, 2211 N. Oak Park Avenue, Chicago, IL 60707 or Riley Children Hospital, 705 Riley Hospital Drive, Indianapolis, IN 46202. Or you may visit our Sympathy Store at www.jacksonfuneral.com

The family of JoAnn Marie Brown created this Life Tributes page to make it easy to share your memories.

Send flowers to the Brown family.