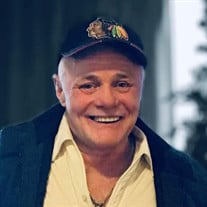 John Joseph Adduci, age 72, of DeMotte, IN passed away Monday, January 24, 2022 at home peacefully. On September 3, 1949 in Chicago, Illinois, John was born to Joseph M. and Marietta “Jackie” (Parrish) Adduci. He graduated from Mendel Catholic Prep High School, Class of 1967. John resided in DeMotte for over 30 years. He married Pamala J. “Jane” Alsman in Lynwood on May 10, 1991. She preceded him in death on November 28, 2000. John was a lifetime electrician and affiliated with the Catholic Church. He was an avid baseball fan, a former member of the Pittsburg Pirates scouting team, a coach, and an entrepreneur. He also starred as an extra in the major motion picture “Rookie of the Year” with Barry Bonds. John is survived by his son, John K. (Tonya) Adduci of Frankfort, Illinois; 2 grandsons, Dominic and Christopher Adduci; brothers, Carmen Adduci of Oak Park, IL, Jim (Linda) Adduci of West Chicago, IL, Matthew (Karen) Adduci of Beecher, IL; sister, Cathy Adduci of River Forest, IL; many nieces and nephews: Christy Kennedy, Gina Adduci, Jenna Ronan, Nick and Mike Adduci; and great-nieces & nephews. He is preceded in death by his parents, Joe and Jackie and wife, Jane. Friends and family may visit at Jackson Funeral Service of DeMotte on Tuesday, February 1, 2022 from 10:00 to 1:00 PM. A funeral service will follow immediately on Tuesday at Jackson Funeral Service of DeMotte at 1:00 PM with Deacon Joe Van Schepen officiating. Interment will be held at Holland Cemetery.

The family of John Joseph Adduci created this Life Tributes page to make it easy to share your memories.

John Joseph Adduci, age 72, of DeMotte, IN passed away Monday,...

Send flowers to the Adduci family.