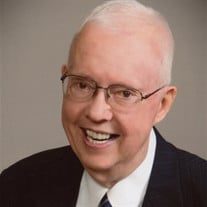 John Bernard Egan passed away on May 5, 2019 in Lafayette, Indiana. He was born on May 25, 1936 in Lima, Ohio, the son of John and Laverna (Grote) Egan. John was a graduate of St. Rose High School and valedictorian of the Class of 1953. He received his bachelor’s degree in Music from the College Conservatory of Music of the University of Cincinnati in 1956 and his Ph.D. from Indiana University in 1962. While at Indiana University he served as a graduate teaching assistant in Music Theory and Piano from 1956-1959. John met Anne-Marie Egan (nee Summers) of Westminster, MD, who was also a graduate student at Indiana University. They were married on August 23, 1958. John and Anne-Marie journeyed to St. Francis Xavier University in Antigonish, Nova Scotia, Canada where John served as an Associate Professor of Music and Director of Music from 1959-1962. In 1962, the Egans came to Saint Joseph’s College in Rensselaer where John became a Professor of Music. Over the years, John served as Music Department chairman, Humanities Division coordinator, Core Director, Choir Director, Accompanist, Music Minister, and faculty sponsor of the Woodrow Wilson Visiting Faculty Fellows Program. John was a founding member and past chairman of the Council of Fellows and member of the Athletic Hall of Fame committee. John was active in the local community and beyond. He was a music minister for St. Augustine Catholic Church in addition to many other churches over the years. John was also involved with the St. Augustine Parish Council, Knights of Columbus, Rensselaer Central Board of School Trustees, Indiana State School Board Association (past president), Rensselaer Park Board, Rotary (past district governor, past president, and Paul Harris Fellow), Rotary International Ambassadorial Scholarship Committee, Ancilla College Board of Trustees, Gibault Board of Trustees, Jasper Foundation, and Lafayette Symphony Orchestra. Former Indiana Governor Frank O’Bannon recognized him with the honor of Sagamore of the Wabash. John and Anne-Marie shared their musical talents by performing many times, many ways for the community. They played numerous dedicatory piano and organ recitals and conducted choral festivals throughout the state. Hundreds of piano students studied privately with John over the years. John didn’t know a stranger and had a remarkable gift of connecting with people, brightening their day with his smile, a bear hug, booming bass voice, encouragement, generosity, and compassion. He kept the staff of Rensselaer’s Post Office hopping with his daily piles of hand-written cards to be mailed to family, friends, and strangers – near and far – often with a newspaper clipping of interest. John is survived by his wife, Anne-Marie, his children, Weldon (Jenny) Egan of Carmel, IN, Anne-Cecile Egan of Rensselaer, Stephen (Renee) Egan of Crown Point, Kathryn (Kevin) Geleott of Rensselaer, Sean Egan of Miller, IN, Brian (Judy) Egan of Rensselaer, and Maureen of Rensselaer; 15 grandchildren, Patrick Egan, Hillary Egan, Elizabeth Thorndyke, Kristine Thorndyke, Stephen B. Egan, Colleen Egan, Shannon Egan, Brendan Egan, Andrew Geleott, Aidan Geleott, Zachary Geleott, Aubrey Geleott, Sara (Daniel) Kinsell, Connor Egan, and Jacob Egan; and two great grandchildren, Henry Kinsell and Liam Kinsell. John was preceded in death by his parents and brother, Robert Egan. Friends may call at the Jackson Funeral Chapel in Rensselaer on Friday, May 10, 2019 from 1:00 – 7:00 pm CST. Funeral Mass will be on Saturday, May 11, 2019 at 10:00 am CST at St. Augustine Catholic Church with Fr. Don Davison, C.PP.S. officiating. In lieu of flowers, memorials are suggested to the Jasper-Newton Foundation, PO Box 295, Rensselaer, IN 47978 or to St. Augustine School, 318 N McKinley Ave, Rensselaer, IN 47978.

John Bernard Egan passed away on May 5, 2019 in Lafayette, Indiana. He was born on May 25, 1936 in Lima, Ohio, the son of John and Laverna (Grote) Egan. John was a graduate of St. Rose High School and valedictorian of the Class of 1953. He... View Obituary & Service Information

The family of Dr. John B. Egan created this Life Tributes page to make it easy to share your memories.

Send flowers to the Egan family.