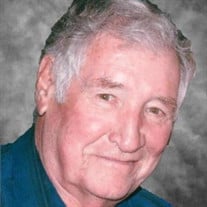 John Howard Jr., age 88, of Rensselaer, Indiana, passed away on July 2, 2021, at the Springs of Lafayette, IN. John was born in North Judson, IN on October 12, 1932, the son of Johnny and Fannie (Barnett) Howard. John graduated from North Judson High School. He then attended & graduated from the former Tri-State University in Angola, Indiana and earned a degree in Civil Engineering. He worked for numerous engineering firms as a civil engineer and helped design roads and bridges along Interstate 65 and in Lake County, Indiana. John married Arlene Ruby Dedloff on June 9, 1956, in Knox, IN, and she preceded him in death on April 29, 2020. Together, they raised four children. John was a United State Air Force Veteran having served during the Korean War. He was a member of St. Luke Lutheran Church in Rensselaer. He was a member of the Rensselaer Bombers 500 Club. He enjoyed the game of golf and was long time member of Curtis Creek Country Club. John also enjoyed woodworking and was a gifted craftsman. He built numerous miniature scale, wood-replica, heavy equipment vehicles. He also made a wood chess set including the board and individual chess pieces. John is survived by his children, John Jeffrey Howard of Rensselaer, IN; Laura (Gary) Clouse, of Rensselaer, IN; Michael “Mike” (Sara) Howard, of Houston, TX, and Kirk (Imelda) Howard of Thorton, CO; grandchildren, Aimee, Joshua, Jillian, and Leah; great-grandchildren, Becca, Baylee, Beau, Dillan, Addysan, and Cale; one sister, Marianne Eaton of Knox, IN. John was preceded in death by his wife, parents, two sisters and one granddaughter, Amber Howard. Friends may visit with the family from 4:00PM to 7:00PM, Monday, July 5, 2021 at Jackson Funeral Chapel of Rensselaer and from 9:00AM until time of service at St. Luke Lutheran Church, Rensselaer on Tuesday, July 6, 2021. A funeral service will follow at 10:00AM at St. Luke Lutheran Church on Tuesday with Pastor Mark Cohen officiating. Interment will take place at Round Lake Cemetery in Knox, IN. Memorial contributions may be made in John’s honor to St. Luke Lutheran Church, Rensselaer, Indiana.

John Howard Jr., age 88, of Rensselaer, Indiana, passed away on July 2, 2021, at the Springs of Lafayette, IN. John was born in North Judson, IN on October 12, 1932, the son of Johnny and Fannie (Barnett) Howard. John graduated from North... View Obituary & Service Information

The family of John Howard Jr. created this Life Tributes page to make it easy to share your memories.

Send flowers to the Howard family.