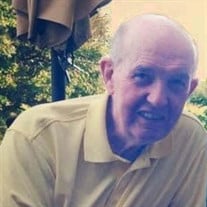 John Robert Michael, age 78 of Rensselaer, Indiana, passed away Saturday, August 21, 2021 at the Franciscan Hospice House in Indianapolis. John was born in Rensselaer, Indiana on January 17, 1943, the son of the late John Milton and Emma Mae (Lowman) Michael. John was a lifetime resident of Rensselaer and on December 26, 1964 in Rensselaer, he married Sally Louise Hasty, who preceded him in death on July 2, 2020. He graduated from Rensselaer Central High School, the Class of 1961. He continued his education and graduated from St. Joseph’s College in Rensselaer, attended Purdue University and received his Master’s Degree from Butler University. John, then led a successful career as a teacher and guidance counselor to countless students from Rensselaer Central, North Newton, Kankakee Valley and West Central School Corporations. His career spanned for over 38 years. John was a member of the St. Augustine Catholic Church. After retirement, he and Sally made a second home in Winter Haven, FL, where they continued to make many friends and shared their home with their children and grandchildren, when they came to visit. Family was always their core responsibility and they cherished spending holidays, vacation and time with all their loved ones. John is survived by two sons, John Jeffery (Cheryl) Michael of Indianapolis, Indiana and Gregory James (Katie) Michael of Rensselaer, Indiana; seven grandchildren, Sarah Lorraine, Madelyn Louise, Emma Jean, Sophie, Jimi, John and Rowan Michael; two sisters, Gayla Lee (Chuck) Tilton and Marcy Ann (Bill) Busse. He was preceded in death by his parents and wife, Sally Michael. There will be a private, family memorial service. In lieu of flowers, please consider a donation to the Jasper Newton Foundation in memory of John Michael.

John Robert Michael, age 78 of Rensselaer, Indiana, passed away Saturday, August 21, 2021 at the Franciscan Hospice House in Indianapolis. John was born in Rensselaer, Indiana on January 17, 1943, the son of the late John Milton and Emma Mae... View Obituary & Service Information

The family of John Robert Michael created this Life Tributes page to make it easy to share your memories.

Send flowers to the Michael family.