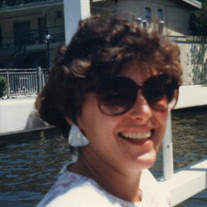 Kathleen Rose Lebed, age 61, of Rensselaer, Indiana passed away Wednesday, May 22, 2019 at St. Vincent Hospital, Indianapolis, Indiana. Kathleen was born in Lafayette on September 6, 1957, the daughter of Sally (nee Pucka) Lebed and the late Walter F. Lebed. She resided in Chicago, Illinois and in Chesterton, Michigan City and Medaryville, Indiana before returning to Rensselaer in 2006. She was a 1975 graduate of West Central High School in Francesville, Indiana. Kathleen was a service clerk with Strack ‘n VanTil in Rensselaer for four years, also having worked for Walmart and with various insurance companies. Kathleen was involved in the catholic faith. She enjoyed watching movies, working puzzles and traveling. She was an artist and enjoyed doing various art work. Surviving with her loving mother Sally Lebed of Rensselaer, Indiana are two brothers, Walter T. “Walt” (fiancee’ Robin Vertue) of Lafayette, Indiana and Richard F. (Bekah) Lebed of Scottsdale, Arizona. Visitation will be held at the Jackson Funeral Chapel in Rensselaer on Friday, May 31, 2019 from 11 am to 1 pm CDT. Funeral services for Kathleen will be held at 1:00 pm CDT on Friday, May 31, 2019, at the Jackson Funeral Chapel in Rensselaer. Private Inurnment will be held at Mt. Calvary Cemetery in Rensselaer. Memorials are suggested to the Indiana Donor Network.

The family of Kathleen Rose Lebed created this Life Tributes page to make it easy to share your memories.

Send flowers to the Lebed family.