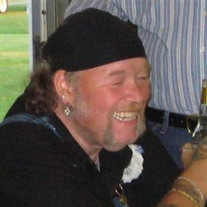 Kelly “Tank” Miller, Jr., age 54, of Rensselaer, Indiana, passed away Tuesday, December 1, 2020 at IU Health Methodist Hospital, Indianapolis. He was born in White County, Indiana on May 2, 1966, the son of Kelly, Sr. and Dora Jean (Bulington) Miller. Kelly or “Tank” graduated from Rensselaer Central High School, the Class of 1984. On September 13, 1985, in Rensselaer, he married his high school sweetheart, Staci (Webb) Miller. Tank worked as a Press Operator and Die Setter for the former Schumacher Electric from 1984 until its closing. Tank was a member of the Iroquois Archery Club. He enjoyed fishing, hunting and doing anything outdoors. He especially enjoyed riding his motorcycle and four-wheeler. Tank, also, enjoyed listening to music and spending time with his friends and family. He was known to usually have a joke or prank for every one of them. Most of all, Tank was a devoted and loving husband, who was certain to live his life the way he wanted, but was caring and would do anything to help his family or friends. Tank is survived by his loving wife, Staci and by his close friends and extended family who will miss him dearly. He was preceded in death by his parents and 1 brother, Kevin Miller. Friends and family are invited to a Celebration of Life in Tank’s memory on Saturday, December 12, 2020 at 2:00PM at the Knights of Columbus Hall, 325 E Vine St, Rensselaer, IN 47978. Memorial contributions in Tank’s memory may be made to the Iroquois Archery Club, 3200 W 900 S, Rensselaer, IN 47978 or to the Family.

The family of Kelly "Tank" Miller Jr. created this Life Tributes page to make it easy to share your memories.

Send flowers to the Miller family.