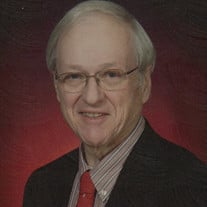 Kenneth J. Ahler, M. D., age 77, of Rensselaer passed away on Tuesday, September 12, 2017 at Franciscan Health Rensselaer where he was a resident of Alternacare. Ken was born in Medaryville, Indiana on August 4, 1940, the son of James Herman and Bernadine Margaret (Benner) Ahler. Ken had lived in Rensselaer for more than 47 years, having also lived in Indianapolis and South Bend, Indiana and Ellsworth Air Force Base in South Dakota. He was raised in Pulaski County where he graduated as Valedictorian of the Medaryville High School Class of 1958. Ken attended St. Joseph College in Rensselaer where he graduated A. B. Magna Cum Laude (Biology) and was Valedictorian of his college class of 1962. He continued his education at Indiana University School of Medicine in Indianapolis where he received his M. D. in June 1966. He completed his internship from 1966-67 at St. Joseph’s Hospital in South Bend, Indiana and his residency there from 1967-68. Ken served in the United States Air Force Medical Corp. from 1968-1970. During that time he was Chief of Out-Patient Services at Ellsworth Air Force Base, South Dakota. For more than 45 years Ken was a physician with, and a founding member of, the Clinic of Family Medicine in Rensselaer with active medical staff hospital privileges at Jasper County Hospital. He served as the Jasper County Coroner from 1973-1981. On August 24, 1963 in Chesterton, Indiana Ken married the love of his life, Margaret Ann O’Donnell. Together they had three children, Dr. John Patrick (Melissa) Ahler, Mary Margaret (Don) Spagnolo and the Honorable James Robert (Tara) Ahler. He is also survived by thirteen grandchildren, Jacob, Ben, Noah, Adam, Sam, Isaac, Abigail, Philip, Annie, Olivia, John, Quin, and Sydney, and one great-grandchild, Madison Margaret. Ken is preceded in by his parents and his beloved wife Margaret Ann. His professional activities included Medical Director at Rensselaer Care Center, Rensselaer, Indiana; Pro-member of Quality Assurance Committees-State level (Peerview, Inc.); Chairman of State Sanction Committee (Peerview, Inc.); Senior Associate at the Clinic of Family Medicine, Rensselaer, Indiana; Preceptor for the Department of Family Medicine at Indiana University School of Medicine; a member of the Governor’s Commission for Newborn Inborn Errors of Metabolism, 1978; and served as the assistant physician at the Boy Scout’s of American National Jamboree at A. P. Hill, Virginia, 1985-2005. Ken was a member of St. Augustine Catholic Church in Rensselaer, the American Medical Association, a Distinguished Member of the Indiana State Medical Association, the Jasper County Medical Society, serving as president from 1987-88, was a Fellow of the American Academy of Family Practice, and Diplomat of the American Board of Family Practice, where he was certified in 1972, re-certified in 1978 and again in 1984. His community involvements included memberships in Rensselaer Rotary, President in 1984-85; the Sagamore Council Boy Scouts of America, Executive Board and President 1984-1986; North Central Region Boy Scouts of America; St. Joseph College, Trustee; Jasper County Development Foundation, past Chairman; Catholic Relationships Area IV-B.S.A. North Central Region former Area Chairman; and the former State Bank of Rensselaer, Board of Directors; and was a 4th Degree Knights of Columbus. In 2004, Governor Kernan awarded Ken the high honor of Sagamore of the Wabash. Ken enjoyed reading, gardening, community activities, Boy Scouts, cooking and, most importantly, vacationing with his family. Friends are invited to visit with the family at Jackson Funeral Chapel of Rensselaer on Thursday, September 14, 2017 from 2:00 to 7:00 PM with Rosary services at 7:00 PM. Funeral Mass for Kenneth Ahler will be held at the St. Augustine Catholic Church in Rensselaer on Friday, September 15, 2017 at 11:00 AM with Father William Stang C.PP.S. officiating. Interment with Military Honors will follow at Mt. Calvary Cemetery in Rensselaer. Memorials may be made to the St. Augustine Catholic School.

Kenneth J. Ahler, M. D., age 77, of Rensselaer passed away on Tuesday, September 12, 2017 at Franciscan Health Rensselaer where he was a resident of Alternacare. Ken was born in Medaryville, Indiana on August 4, 1940, the son of James Herman... View Obituary & Service Information

The family of Dr. Kenneth J. Ahler created this Life Tributes page to make it easy to share your memories.

Send flowers to the Ahler family.