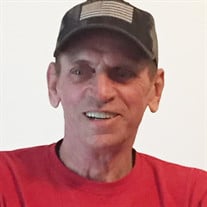 Kevin James Battleday, age 67, of Rensselaer, Indiana, passed away Friday, December 25, 2020 at Franciscan Health Rensselaer. He was born in Rensselaer, Indiana on September 3, 1953, the son of Robert and Agnes (Souder) Battleday. Kevin attended the Michigan City Public Schools and then immediately enlisted and served in the United States Army. Kevin was a welder by trade and worked in various places including Chief Industries in Rensselaer. He was also a carpenter who owned his own construction company for several years. In his younger years, Kevin enjoyed the open road on his Goldwing motorcycle and playing softball. Then, in his later years, he loved camping with his family, playing with his grandchildren, working on various around-the-home projects and making wooden plaques in his spare time. He was especially proud to have celebrated almost 5 years of sobriety. He helped numerous veterans with their sobriety. He became an Indiana Community Health Worker/Certified Recovery Specialist in August 2018. The organization, Celebrate Recovery, was a huge part of his sobriety. Kevin gave his life to his Lord & Savior and was baptized on April 24, 2017. Kevin had a generous heart and was known for his care for others and offering to help anyone, whenever he could. Kevin is survived by his children, Jamie (Max) Valentine of Rensselaer and Robert (Sam) Battleday of Lake Village, IN; step-daughters, Aleena (Jared) McCord, Brook, IN and Kaylee Krull, Rensselaer, IN; his former wife, Teri (Vogt) Battleday, Rensselaer, IN; siblings, Richard (Sis) Battleday, Wanatah, IN, Charlie (Lea) Battleday, Valparaiso, IN, Lynn (Don) Peterson, Nunnelly, TN, Eva (Frolin) Allegre, Valparaiso, IN, Eddie (Geri) Battleday, Michigan City, IN; grandchildren, Trevor, Zack, Brennen, Owen, Zhiya, Emmarie, Eddie, Brynlee Grace, Kingston, Harper, Hunter and Derrick. He was preceded in death by his parents and one grandson, Jared Valentine. A public visitation will be held on Wednesday, December 30, 2020 from 4:00-6:00PM at Jackson Funeral Chapel of Rensselaer. Social distancing, a maximum number of 25 people will be enforced, and masks must be worn at all services due to the current pandemic. Private funeral services will be at 6:00PM with full military rites afforded. A Celebration of Life is being planned for the Summer of 2021. Memorial contributions may be made in Kevin’s memory to Celebrate Recovery of Indianapolis or to the Family.

The family of Kevin James Battleday created this Life Tributes page to make it easy to share your memories.

Send flowers to the Battleday family.