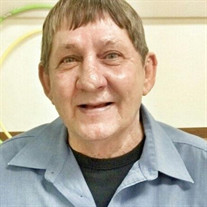 Larry L. Geesa, age 64, of Rensselaer, Indiana passed away at his home on Tuesday, November 26, 2019. Larry was born in Jasper County, Indiana on December 9, 1954, the son of Lawrence X. Geesa and Dolly M. (nee Clouse) Geesa. Larry was a lifetime resident of Rensselaer, receiving his GED from the Rensselaer Schools. He was previously employed with Rose Acre Farms. Larry enjoyed playing Billiards with friends, going to the horse races and was a huge fan of NASCAR. He was a member of American Legion Post #280, VFW Post #1279 and the Fraternal Order of Eagles #2548, all in Rensselaer. Surviving are his children, Gregory Geesa and Heather Geesa both of Rensselaer, Indiana, grandchildren Jacob, Nathan and Gracie Geesa, Jaemen Bailey, and Kale, Jase and Kynedi Stokes. Also surviving are his siblings, Louise (Allen) Wortley of Rensselaer, Indiana, Leatha Anderson of Buffalo, Indiana, Loretta L. Geesa, Lyle L. Geesa and Lorie J. Geesa, all of Rensselaer, Indiana. Larry was preceded in death by his parents, a niece, Amanda, a nephew, Jimmy Lee and three great-nephews. Friends may visit with the family at the Jackson Funeral Chapel in Rensselaer on Tuesday, December 3, 2019 from 5:00 to 7:00 p.m. Memorial services for Larry will be held Tuesday at 7:00 p.m. at the Jackson Funeral Chapel with Derald Ailes officiating. Memorials are suggested to the American Heart Association.

The family of Larry L. Geesa created this Life Tributes page to make it easy to share your memories.

Larry L. Geesa, age 64, of Rensselaer, Indiana passed away at...

Send flowers to the Geesa family.