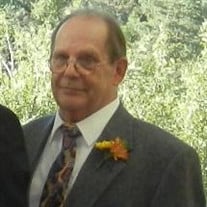 Larry D. Purdy, age 74, of Portage, Indiana, formerly of Hammond and Highland, passed away Monday, March 18, 2019 at Golden LivingCenter - Fountainview Place, Portage. Larry was born in Gary, Indiana on July 9, 1944, the son of Homer and Elizabeth (Russell) Purdy. His first marriage was to Patricia Hacker and she passed away November 29, 1999. From this union, Larry and Patricia raised two sons, Timothy and Sean. Then, on May 13, 1995, Larry married Rudel Levila O’Donnell and she passed away September 16, 2005. Larry was a railroad man, working as a clerk for the Indiana Harbor Belt (IHB) Railroad for 30 years, taking an early retirement so he could care for his ailing wife, Rudel. Larry was an accomplished musician. He was proficient in playing the organ and other key boards. During his younger years, he was known to organize and host musical gatherings in his single-car garage, turned music studio, with friends and family. Music was a way he connected with people and an opportunity for him to share his gift in a communal way. Larry and Rudel were also animal lovers. They cared for many pets over the years. Larry was also an avid collector of Hargrove paintings and Sci-fi collectibles. Larry leaves behind his two sons, Timothy (Julie) Purdy of Tuscon, AZ and Sean Purdy of Hobart, IN, one granddaughter, Brianna Skudra-Purdy; two sisters, Judy Wenzel of Hobart, IN and Carol (Julius) Najzer of Portage, IN. Larry was preceded in death by his parents, both spouses, Patricia and Rudel, three brothers and two sisters. Cremation services are being handled by Jackson Funeral Chapel of Rensselaer. A memorial service for Larry will be held at a soon to be announced date and time. His final resting place will be in Osborne Cemetery, Rensselaer, Indiana.

The family of Larry D. Purdy created this Life Tributes page to make it easy to share your memories.

Send flowers to the Purdy family.