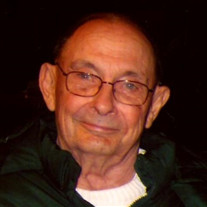 LaVerne Ralph “Chub” Meyer, age 89 of Rensselaer, IN passed away Saturday, October 7, 2017 at his home. LaVerne was born on December 31, 1927 in Plano, Illinois to the late Rudolph Henry and Augusta Frances (Cussler) Meyer. LaVerne was one of twelve graduates of the Fair Oaks High School, Class of 1945. He was a self-employed farmer all his life. On February 18, 1952 in Rensselaer, he married the love of his life, Nancy Patricia Eldridge, who preceded him in death on August 19, 2016. LaVerne was a proud veteran of the United States Army. He served in the Korean War from 1946 to 1947. Both he and Nancy were generous with their time to their family and their community. LaVerne was a past Jasper County Fair Board member, a past Jasper County REMC Board member, past President of the Jasper County Historical Society, one of the founding members of the Jasper County Retired Iron Club, a past member of the Hanging Grove Advisory Board, Jasper County 4-H Council and the Jasper County Courthouse Centennial Committee. He was also very active in the Jasper County Republican Party. Additionally, LaVerne was a member of the Trinity United Methodist Church in Rensselaer. LaVerne is survived by three children, Jan (Brad) DeWees of West Lafayette, Indiana, Thomas (Linda) Meyer and Brian Meyer, both of Rensselaer, Indiana. Sister-in-law, Phyllis Meyer, six grandchildren, Kelsey (Steve) Bush, Courtney (Kyle) West, Kolton (Cassey) Meyer, Taylor Meyer, Casidee Meyer and Drew Meyer; two great-grandchildren, Anderson West and Amberley Meyer; numerous nieces and nephews. He was preceded in death by his parents, his wife, two brothers, a sister-in-law and one grandson, Clinton Meyer. The family wishes to express their love and gratitude to his caretaker, Ginny Markle. Friends may visit with the family at the Jackson Funeral Chapel of Rensselaer on Tuesday, October 10, 2017, from 3:00 to 8:00 P.M. (CDT). Funeral services for LaVerne will be held at the Jackson Funeral Chapel of Rensselaer on Wednesday, October 11, 2017 at 10:30 A.M. (CDT) with Pastor John Hostetter officiating. Interment will follow at Osborne Cemetery with full military rites. Memorials may be made to the Osborne Cemetery or the charity of the donor’s choice.

The family of LaVerne Ralph Meyer created this Life Tributes page to make it easy to share your memories.

LaVerne Ralph “Chub” Meyer, age 89 of Rensselaer, IN passed away...

Send flowers to the Meyer family.