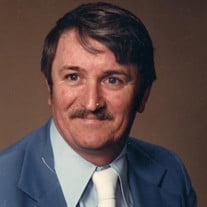 Lawrence E. Walts, Jr., age 76 of Rensselaer, Indiana passed away at his home on Wednesday, June 12, 2019. Lawrence was born in Salem, Indiana on February 14, 1943, the son of Lawrence E. and Ruby Ethel (nee Shoults) Walts, Sr. On October 6, 1962, in Rensselaer, Indiana Lawrence married Carol Hartley who survives. He retired in 2005 from the maintenance division of the former Griffith Foods of Remington where he was employed for 36 years. Lawrence was a member of the Kingdom Hall of Jehovah’s Witnesses in Rensselaer. He enjoyed woodworking, camping, 4-wheel riding, and was an avid fisherman and golfer. Lawrence adored his family and will be dearly missed by them. Surviving with his wife Carol of Rensselaer, Indiana are four daughters, Corinna (Hobert) Whitaker of New Richmond, Indiana, Amie (Kenny) Greenlee of Mulberry, Indiana, Wendi (Wendell) Thompson and Brandi Walts, both of Rensselaer, Indiana; 8 grandchildren, six great-grandchildren and his siblings, Barbara Henderson of Monticello, Indiana, Mary Margaret (Dan) Benadict and Marcella Walts both of Florida, Mike Walts of Delphi, Indiana, Marvin (Lora) Walts of Brookston, Indiana and Melvin (Karen) Walts of Attica, Indiana. Lawrence was preceded in death by his parents, a daughter Lisa Walts and one grandson Garrett Walts. Per Lawrence’s wishes there will be no services. Jackson Funeral Chapel in Rensselaer is assisting the family.

The family of Lawrence E. Walts Jr. created this Life Tributes page to make it easy to share your memories.

Send flowers to the Walts family.