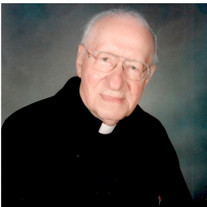 Fr. Leonard Kostka, C.PP.S., who at 104 was the oldest living Missionary of the Precious Blood in the world, died at 12:05 PM on Friday, December 21, 2018 at St. Charles Center in Carthagena, Ohio, where he made his home. He had been preparing for his departure in recent weeks. He was born on March 1, 1914 in Chicago to Anthony and Rose (Schmidt) Kostka. Raised in Detroit, he was a lifelong Detroit Tigers fan. Fr. Kostka entered the Society of the Precious Blood and was ordained on September 8, 1940. This year he celebrated the 78th anniversary of his ordination. Fr. Kostka has had many ministries in his 70 years as a priest. He ministered in parishes in Brooklyn, N.Y., and Detroit; was associate editor of the Precious Blood Messenger; served as a chaplain at Seton Hill College in Greenburg, Pa.; and was a navy chaplain from 1945-1947. He was a member of VFW Post #1279 in Rensselaer serving as Chaplain for many years. He was also a member of K of C Council 1881 and Marian Assembly 1833 both in Rensselaer. In 1948, he was appointed a professor of Saint Joseph’s College in Rensselaer, Ind., which is sponsored by the Missionaries. There he has served as part of the college family for 65 years, as a chaplain and instructor of religion courses. He also helped at St. Augustine Parish in Rensselaer for many years. Fr. Kostka was a professor emeritus at the college, and was a great support to its students, faculty, staff and sports teams for many years, until a heart attack forced his move to St. Charles in 2013. Officially retired and older than anyone else in the Congregation, Fr. Kostka continue to dream and envision and pray for the C.PP.S. during his years at St. Charles. He offered an impassioned plea for the community to “get fired up” for its bicentennial in 2015: “We talk about evangelization, we talk about reconciliation, and those are wonderful things—but they are the spokes of the wheel. At the hub is our devotion to the Blood of Christ. Unless all our missions and ministries are imbued with the Precious Blood, they will all come to nothing.” At the provincial assembly in May 2018, Fr. Kostka led the prayer before the members voted to elect new leadership. He often mused about his long life, amazed that God had allowed him to live so long. “I wonder how many Masses I have offered, in 75 years?” he reflected in 2015. “Here’s a thought I like to contemplate: as the angels look down from heaven, what do they see? They see a million chalices raised aloft, adoring and imploring the trinity. I like to picture myself up there with the angels, seeing those million chalices.” He was able to concelebrate Mass the day before he died; infirmary staff members who cared for him said his dying wish was to see Jesus on Christmas. Fr. Kostka is survived by a brother, Robert Kostka of Raleigh, N.C.; and numerous nieces and nephews, great-nieces and great-nephews. He was preceded in death by a brother and sister-in-law, Frank and Irene Kostka; and two sisters and brothers-in-law, Florence and Walter Kryskalla and Marguerite and Adolph Zengelsche. A Memorial Mass will be celebrated on Saturday, January 12, 2019 at 1:00 PM Central at the St. Joseph College Richard E. Scharf Alumni Fieldhouse, Bishop William Higi, will preside. Memorial donations may be made to the St. Joseph College Chapel Renovation c/o St. Joseph College 1027 S. College Ave. Rensselaer, Indiana 47978 www.pumas.saintjoe.edu

Fr. Leonard Kostka, C.PP.S., who at 104 was the oldest living Missionary of the Precious Blood in the world, died at 12:05 PM on Friday, December 21, 2018 at St. Charles Center in Carthagena, Ohio, where he made his home. He had been preparing... View Obituary & Service Information

The family of Father Leonard Kostka C.PP.S. created this Life Tributes page to make it easy to share your memories.

Send flowers to the Kostka family.