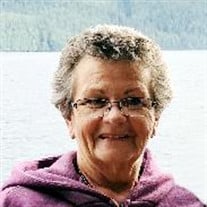 Linda Charlene Webb, 68, of Rensselaer passed away August 11, 2019 at Franciscan Health Rensselaer. Linda was born in Rensselaer, Indiana on October 24, 1950, the daughter of Robert “Ajax” and Lelah Mae (nee Neely) Sanders. A 1969 graduate of Rensselaer Central High School, Linda was an avid softball player for many years. Linda looked forward to hanging out at the pond, time spent playing with her dogs and was an avid walker. She enjoyed being in the garden and watching the fruits of her labor grow. One of Linda’s greatest joys was being with her grandchildren and attending their sporting events. She retired in 2012 after being employed 27 years with the City of Rensselaer Utility office. On February 25, 1996, in Rensselaer, Linda married William “Bill” Webb. Linda is survived by her loving family, husband, Bill Webb of Rensselaer, IN, son Jeremy Pullins of Gurnee, IL, and three step-children, Erica (Julio) Negron of Bristo, VA, Colt (Madonna) Webb of Summerville, SC and Ann (Kevin) Gates of Rensselaer, IN., 8 grandchildren, Samantha Pullins, Tyler Negron, Josh Negron, Eli Negron, Ella Negron, Laine Webb, Maddox Webb and Eleona Gates. Also surviving is her sister , Lelah Maxine “Butch” Zawodny of Greensboro, NC, her brother, Sherman Sanders of Lafayette, IN, and her mother-in-law, Elizabeth Webb of Rensselaer, IN. Linda was preceded in death by her parents Ajax and Lelah Sanders and her father-in-law, Donald Webb. Friends may visit with the family on Saturday, August 17, 2019, from 1:00 to 6:00 p.m. at the Jackson Funeral Chapel in Rensselaer. Funeral services for Linda will be held at 6:00 p.m. Saturday, August 17, 2019, at the Jackson Funeral Chapel in Rensselaer with Tammy Culp officiating. Memorials may be made to Friends of the Jasper County Animal Shelter, c/o Jasper Newton Foundation, P.O. Box 295, Rensselaer, IN 47978.

The family of Linda Charlene Webb created this Life Tributes page to make it easy to share your memories.

Send flowers to the Webb family.