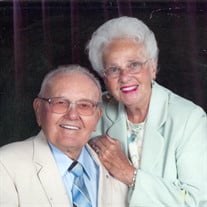 Lucile E. Bozell, age 98, of DeMotte, Indiana passed away on Wednesday, June 23, 2021 at Oak Grove Christian Retirement Village. She was born July 31, 1922 in Owensboro, Kentucky, the daughter of Frank and Dolora (Leach) Wright. Lucile has lived in both Gary and Rensselaer before settling in DeMotte in 1956. She graduated from Tolleston High School, Gary, Indiana, Class of 1940. She also attended the American Floral Arts School. Lucile married Edward E. Bozell in Gary, Indiana on October 21, 1945. He preceded her in death on November 7, 2011. She previously worked for Molenaar Floral & Garden for 18 years and was part owner of Todds Toggery Children’s Store in Rensselaer. Lucile was a member of American Reformed Church, Gideon’s for 67 years, the Red Hat Society, and Nifty Needles. She enjoyed gardening. Lucile is survived by her children: Ronald (Shirley) Bozell of Fishers, Sue (Byron) Frieden of Wheatfield, Pam (Terry) Schultz of DeMotte, Beth (Keith) Dougherty of Valparaiso; 11 grandchildren and 13 great-grandchildren. She was preceded in death by her parents, husband, 1 brother and 1 sister. Friends and family may visit at Jackson Funeral Service of DeMotte on Monday, June 28, 2021 from 9:00 until 11:00 AM. A Funeral Service will immediately follow at Jackson Funeral Service on Monday, June 28, 2021 at 11:00 AM with Pastor Troy Nanninga officiating. Interment will be held at Holland Cemetery. Memorial contributions may be made to Gideon’s International.

The family of Lucile E. Bozell created this Life Tributes page to make it easy to share your memories.

Send flowers to the Bozell family.