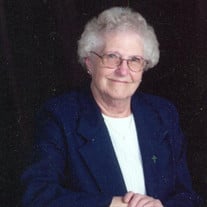 Marcella M. Kikkert, age 93, of DeMotte passed away at Crown Point Christian Village on Tuesday, January 2, 2018. She was born January 12, 1924 in Chicago, IL to George and Anna (VanKoevering) Morehouse. Marcella attended Chicago Public Schools and later Chicago Beauty School. She married the love of her life, Raymond W. Kikkert on November 17, 1944 in Lansing, IL. He preceded her in death on March 29, 1996. Marcella was a hairdresser for 4 years and worked part-time at Dairy Queen from 1993-2005. Marcella was a member of the American Reformed Church of DeMotte and Hope Circle. She enjoyed crocheting, crafts & sewing, and spending time with her loved ones. Marcella is survived by her children: Marjorie Fase of DeMotte, IN; Marcia (Donald) Sytsma of DeMotte, IN; Linda Peo of Remington, IN; Larry (Ann) Kikkert of DeMotte, IN; Duane (Cris) Kikkert of Charlotte, NC; Dale (Rhonda) Kikkert of DeMotte, IN; Roger (Shannon) Kikkert of Fair Oaks, IN; Lori Bult of Lansing, IL; Sharon (Geoff) Friday of Pittsburgh, PA; 29 grandchildren and 39 great-grandchildren. Marcella was preceded in death by her parents, husband, one brother, George “Bud” Morehouse, one sister, LaVerne Westerhoff and two son-in-laws, Marvin Fase and David Bult. Friends may call at American Reformed Church Fellowship Hall of DeMotte on Friday, January 5, 2018 from 3:00 to 8:00 PM. A Funeral Service will be held at American Reformed Church on Saturday, January 6, 2018 at 10:30 AM with Pastor Rick Vanderwal officiating. Interment will be at Holland Cemetery. To send flowers or share a memory with the Kikkert family, please visit www.jacksonfuneral.com

The family of Marcella M. Kikkert created this Life Tributes page to make it easy to share your memories.

Marcella M. Kikkert, age 93, of DeMotte passed away at Crown...

Send flowers to the Kikkert family.