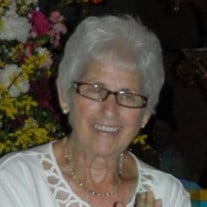 Marguerite Ellen Fisher Henning, age 93, of DeMotte, Indiana passed away Monday, June 14, 2021 at home. She was born August 25, 1927 in Ridgewood (Brooklyn), New York, the daughter of Ralph and Margaret (McKiernan) Fisher. Marguerite married the love of her life, Henry Henning on September 1, 1945. He preceded her in death in December 2005. Her dream was to open a flower shop, which came to fruition with “Flowers by Marguerite” in Merrick, NY and “Henning’s Flower Fair” in Somerset, NJ. The past 15 years she enjoyed watching the growth of “Henning’s Farm & Greenhouses” here in DeMotte. With her passion she became involved with Florists’ Transworld Delivery (FTD) where, in 1965, she won Designer of the Year in the national “America’s Cup”. She was also a member of St. Cecilia Catholic Church. Marguerite is survived by her children: Henry Henning of New Jersey; Alan (Ann) Henning of New Jersey; Ralph (Maureen) Henning of Colorado; John Henning of DeMotte, IN; Adam Henning of DeMotte, IN; daughter-in-law, Ginger Henning; Mary Henning of New Jersey; and Jill Henning of DeMotte, IN; grandchildren: Jonathan, Justin, Brooke, Allison, Brittany, Brendan, Andrew, Michael, Matthew, Jessica, Nicole, Natalie, Gabrielle, and Quinten; 14 great-grandchildren and beloved friend Nancy Cosmo. She was preceded in death by her parents, husband, son James Henning, and siblings: John, Alice, Marylin, and Ralph. Friends and family may visit on Monday, June 21, 2021 at Jackson Funeral Service of DeMotte from 4:00 until 7:00 PM. A Funeral Mass will be held at 11:00 AM on Tuesday, June 22, 2021 at St. Cecilia Catholic Church with Father Michael McKinney officiating. Interment will be held on Wednesday at the Abraham Lincoln National Cemetery in Elwood, Illinois.

The family of Marguerite Ellen Henning created this Life Tributes page to make it easy to share your memories.

Send flowers to the Henning family.