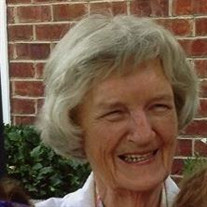 Marvel Louise Fenwick, age 88, passed away on January 16, 2019 at the Franciscan Health Alternacare in Rensselaer, Indiana. Marvel, or Marvelous as she was affectionately known by her family and friends, was born in Milroy Township, Jasper County, Indiana on September 12, 1930. She was the daughter of the late Virgil and Anna (Castor) Sanders. Marvel was a lifelong resident of Jasper County, graduating with the Class of 1948 from Rensselaer High School. On October 19, 1948, she married the love of her life, Frank Jr. Fenwick. Frank and Marvel raised their family on the family farm in Jordan Township in Jasper County. When Frank and Marvel retired from farming they moved to their current home Rensselaer on Park Avenue where she had lived for the past thirty years. Marvel and Frank were very active in State and County politics in the 1960's and 1970's and very much enjoyed the political scene. Marvel was the manager of the Rensselaer License Branch for many years. She was also personnel manager at Per Pak Corporation in Foresman, Indiana for several years. Marvel was a member of the Trinity United Methodist Church in Rensselaer. She enjoyed baking and was well known for her delicious chocolate pies, and everyone looked forward to her Christmas candies. Marvel enjoyed her family and friends and was always excited about the next travel adventure. She always looked forward to the midwinter months when they could get to Florida and winter at Marco Island. Marvel is survived by her four children, Pam (Mike) Spence of Commerce, Michigan, Ron (Karen) Fenwick of Rensselaer, Randy (Debbie) Fenwick of Middlebury, Indiana and Peggy (Mike) Altman of Rensselaer. Marvel enjoyed her twelve grandchildren, 24 great grandchildren and her great-great granddaughter. She was preceded in death by her husband Frank Fenwick on August 7, 2007, two sisters, Beverly and an infant baby girl, and four brothers, Ralph, Wade, Dwight and Nobel Sanders. Friends may call at Jackson Funeral Chapel in Rensselaer on Sunday, January 20, 2019 from 2:00 to 6:00 p.m. CST. Funeral services for Marvel will be held on Monday, January 21, 2019 at 11:00 a.m. at Jackson Funeral Chapel in Rensselaer with Tammy Culp officiating. Interment will be next to Frank at the Weston Cemetery in Rensselaer. Memorials may be made to Franciscan Health-Rensselaer Alternacare or the Trinity United Methodist Church in Rensselaer.

Marvel Louise Fenwick, age 88, passed away on January 16, 2019 at the Franciscan Health Alternacare in Rensselaer, Indiana. Marvel, or Marvelous as she was affectionately known by her family and friends, was born in Milroy Township, Jasper... View Obituary & Service Information

The family of Marvel Louise Fenwick created this Life Tributes page to make it easy to share your memories.

Send flowers to the Fenwick family.