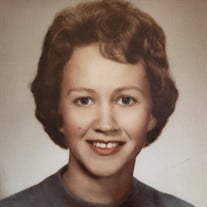 Mary Louise Ames, 91, of Rensselaer, Ind., passed away July 19, 2020 at the Franciscan Health Rensselaer. She was born on April 27, 1929 in Rensselaer, Ind. to Ivan and Madge (Bishop) George. Her mother was a homemaker, and her father served in the Navy during World War II. A lifelong resident of Rensselaer, Ind., she attended the Rensselaer Schools. She married Dale L. Ames on April 10, 1946 in Rensselaer, Ind. Dale preceded her in death on January 10, 1965. In January 1964, Louise started taking classes and working at SJC. She worked for Student Financial Services and was a switchboard operator before graduating from SJC in 1972 with her Bachelor of Arts degree in Elementary Education. After graduating from SJC, Louise worked as a child welfare caseworker for the Jasper County Department of Public Welfare 1972-1990. She then went on to be the Director of the Rensselaer Adult Learning Center, which she founded as an extension of the Portage Adult Education program. The program aims to provide adults with basic job skills and educational requirements, and it was her mission to afford adults the opportunity to further their education. After Louise retired from the Rensselaer Adult Learning Center, she stayed on as a volunteer, helping to facilitate the Center’s move to Drexel Hall on the SJC campus. In 2010, she took the required training course to be a volunteer for Court Appointed Special Advocates for Children (CASA). CASA volunteers are appointed by judges to watch over and advocate for abused and neglected children. Louise continued to volunteer until her health forced her to slow down. She received the Community Service Award from the Rensselaer Alumni Association in 2008. Louise was an active member of the First Presbyterian Church of Rensselaer where she served as an Elder of the Church. She was also a member of the Harris Homes Board of Trustees, the Indiana State Employee Association, a former member of the SJC Alumni Board and SJC Council of Fellows. She enjoyed attending SJC men’s and women’s basketball games and plays and musical events on the campus for over 25 years. In her spare time she loved reading, gardening, and spending time with her grandchildren and great-grandchildren. Louise is survived by her children, Robert (Marna) Ames of Marian, IL, Garry Rex (Deb) Ames of Oakwood, GA, Roger (Jan) Ames of Oxford, OH, and Daniel (Kathy) Ames of Morton, IL; her siblings, Robert George of Yucca Valley, CA, Beverly (Don) Teel of Stonewaii, OK, and Karen Bell of Prattville, AL; eleven grandchildren and several great-grandchildren. She was preceded in death by her parents, husband, brothers, William George and Dean George, along with her brother-in-law, William Bell. Due to the Covid-19 pandemic, burial will take place at Memory Gardens of Rensselaer with a memorial service to be held at a later date.

Mary Louise Ames, 91, of Rensselaer, Ind., passed away July 19, 2020 at the Franciscan Health Rensselaer. She was born on April 27, 1929 in Rensselaer, Ind. to Ivan and Madge (Bishop) George. Her mother was a homemaker, and her father served... View Obituary & Service Information

The family of Mary Louise Ames created this Life Tributes page to make it easy to share your memories.

Send flowers to the Ames family.