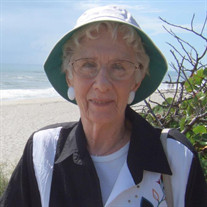 Mary E. (nee Adams) Kooistra-Howe, age 97, of Lowell, went home to be with her Lord on Tuesday, November 10, 2020, at home surrounded by loved ones. She was born June 15, 1923, in Framingham, Massachusetts the daughter of James and Mary (Graybill) Adams. After high school, Mary served in the United States Navy from 1944-1946. In March of 1946, she married William Kooistra, Jr. and moved to Highland, Indiana. He preceded her in death in 1974. She moved to Kerrville, Texas in 1980 and lived there until 2008. While in Texas, Mary helped start the Christian Assistance Ministry (CAM) which helped to aid those in need of food and clothing. She met Ed Howe and they married in 1991. They enjoyed traveling and visiting with family. They were also members of a singing group for seniors called “Fun with Music”. Mary also enjoyed painting, knitting and loved cats. Ed preceded her in death in 2008 and Mary moved back to Highland. She continued to live independently and still enjoyed baking, knitting, bible study and writing letters to her 102 year old Navy friend, Fran Redman and 94 year old neighbor, Dolores Moore. In 2015, Mary moved in with her daughter and son-in-law to Lowell. She loved to sit on the porch with her coffee and watch the hummingbirds and herons that would fly in and feed by the water. She lived a full and adventurous life and experienced a lot of history during her 97 years. Mary is survived by her children: James (Jayne) Kooistra of Gentry, AK; Barbara (Dick) Murray of Huntington, IN; and her twins, William Kooistra III of Holland, MI; Betty (Darold) Nichols of Lowell, IN; her favorite nephew, George (Carol) Kooistra of Brazil, IN; 8 grandchildren and 12 great-grandchildren. Mary was preceded in death by her parents, 1 brother, 1 sister, and husbands, William Kooistra Jr and Ed Howe. Per Mary’s request, there will be no services. Memorial contributions may be sent to CAM in Mary Howe’s honor at PO Box 291352 Kerrville, TX 78028.

Mary E. (nee Adams) Kooistra-Howe, age 97, of Lowell, went home to be with her Lord on Tuesday, November 10, 2020, at home surrounded by loved ones. She was born June 15, 1923, in Framingham, Massachusetts the daughter of James and Mary (Graybill)... View Obituary & Service Information

The family of Mary E. Howe created this Life Tributes page to make it easy to share your memories.

Send flowers to the Howe family.