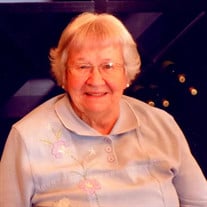 Mary Lou Nagel, age 95, a lifelong resident of Rensselaer, Indiana, passed away Saturday, January 29, 2022 at Autumn Trace Senior Community Center. She was born at home in Union Township, in Jasper County, on January 14, 1927, the daughter of Ernest Paul and Marion Frances (Meader) Rockwell. Mary Lou graduated from Fair Oaks High School with the Class of 1944. On February 7, 1948, in Rensselaer, she married her sweetheart, Edwin F. Nagel, who recently preceded her in death on September 3, 2021. Mary Lou was primarily a homemaker but was so much more as she was instrumental in helping her husband, Edwin, run the family farm. She was also an excellent cook and baker and was known for her delicious meals, where she could entertain her family, friends, and neighbors. While raising her family, Mary Lou was also benevolent with her time and served as a long-time 4-H leader. She was also active in the local Home-Ec Club. She loved being outdoors and working with her hands in her vegetable and flower gardens or planting trees. Mary Lou was a woman of Faith and believer and follower of Jesus Christ. She last attended the Tri-County Bible Church in Rensselaer. If she could leave a legacy, it would be to set a good example of her faith to her children and grandchildren. Mary Lou is survived by her children, Sharon (Daniel) Nykiel of Lafayette, IN, Daryl (Lori) Nagel of Dallas, TX, Scott (Sherry) Nagel of Brook, IN, Helen (Curtis) Gutwein of Rensselaer, IN, and Jeff (Beth) Nagel of West Lafayette, IN; daughter-in-law, Melodye Nagel; 16 grandchildren, numerous great grandchildren and great-great grandchildren; brother & sister-in-law, Walter & Velma Nagel, Jr of Rensselaer, IN. She was preceded in death by her parents, her late husband, Edwin F. Nagel, one son, Byron Nagel, two brothers and one sister. A Celebration of Life will be held at a later date, when friends and family can gather safely outdoors where Mary Lou loved to be. Jackson Funeral Chapel of Rensselaer has been entrusted with her arrangements. Memorial contributions may be made to Elara Caring Hospice, 3768 Rome Dr. A, Lafayette, IN 47905.

The family of Mary Lou Nagel created this Life Tributes page to make it easy to share your memories.

Send flowers to the Nagel family.