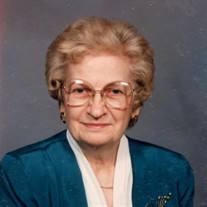 Mary Louise Stath, age 95, of Rensselaer, Ind., passed away Sunday, October 7, 2018 at the Rensselaer Care Center. She was born in Remington, Indiana on March 31, 1923, the daughter of the late Joseph and Theresia (Trulley) Jarvis. Mary graduated from Remington High School, the Class of 1941. On January 24, 1945 in Rensselaer, Indiana, she married Glen Emery Stath, who passed away January 1, 1986. Mary worked as a clerk and bookkeeper for the former United Telephone Company for 20 years. She was a member of St. Augustine Catholic Church in Rensselaer. She was a past member of the Christian Women’s Society, the St. Monica Study Club and Home Ec Club. She, along with her husband and daughter, enjoyed and regularly participated in square dancing. In her youth, she was a member of the Indiana Farm Bureau Rural Youth Club, which originated in the 1930's and promoted education, recreation and community service. Mary will be dearly missed by her surviving children, Russell (Lanette) Stath of Crawfordsville, Ind., Edward (Jacqueline) Stath and Anita Padgett, both of Rensselaer, Ind., six grandchildren and five great-grandchildren. She was preceded in death by her parents, one son, Ronald L. Stath, one brother and five sisters. Friends may visit on Wednesday, October 10, 2018 from 4:00 - 8:00PM, at Jackson Funeral Chapel of Rensselaer with Rosary services at 7:30PM. A Funeral Mass of Christian Burial will be held on Thursday, October 11, 2018 at 10:00AM at St. Augustine Catholic Church with Father Don Davison officiating. Interment will follow at Mt. Calvary Cemetery in Rensselaer. Memorial contributions may be made to the St. Augustine Catholic School.

Mary Louise Stath, age 95, of Rensselaer, Ind., passed away Sunday, October 7, 2018 at the Rensselaer Care Center. She was born in Remington, Indiana on March 31, 1923, the daughter of the late Joseph and Theresia (Trulley) Jarvis. Mary... View Obituary & Service Information

The family of Mary Louise Stath created this Life Tributes page to make it easy to share your memories.

Send flowers to the Stath family.