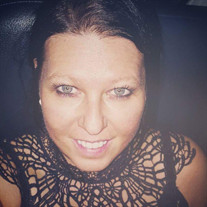 Melissa Kay “Missy” Deno of Rensselaer passed away Wednesday, October 10, 2018 due to injuries sustained in an automobile accident. Missy was born in Rensselaer, Indiana on January 25, 1978, the daughter of Cindy (Potts) Burks and the late Steve Williams. She graduated from Rensselaer Central High School with the class of 1996, continuing her education with the Everest Medical Assistant program. On September 10, 2011, in Sevierville, Tennessee Missy married Brian Deno who survives. She was a construction laborer with FBI Builders for the past 13 years. Missy previously worked at Help At Home, Dairy Queen and did office cleaning for several local banking institutions. She enjoyed motorcycle riding and shopping, and spoiling her beloved dog Daisy. Missy is survived by her loving husband, Brian Deno of Rensselaer, two children, Bryant Warren and Hunter Warren both of Rensselaer, her mother and step father, Cindy and John Burks of Wheatfield, IN, two sisters, Kelly (Joe) Neira of Rensselaer and Jennifer (Adam) Naughton of Surprise, AZ, a brother, Sean Montgomery of Wheatfield, three nieces, Natali Gastineau, Kaprice Pellegrino and Bailee Neira, a nephew, Riley Naughton and her in-laws, Denny and Kay Deno of Lafayette, IN. She was preceded in death by her father, and a niece, Kayleigh Naughton.. Friends will be received at the Jackson Funeral Chapel of Rensselaer on Sunday, October 14, 2018 from 1:00 - 6:00 p.m. Funeral services will be held on Sunday at 6:00 p.m. at the Jackson Funeral Chapel. Memorials are asked to be made to the family for her children by procuring the proper envelope at the Jackson Funeral Chapel or through Lafayette Bank and Trust in Rensselaer.

Melissa Kay &#8220;Missy&#8221; Deno of Rensselaer passed away Wednesday, October 10, 2018 due to injuries sustained in an automobile accident. Missy was born in Rensselaer, Indiana on January 25, 1978, the daughter of Cindy (Potts) Burks and... View Obituary & Service Information

The family of Melissa Kay "Missy" Deno created this Life Tributes page to make it easy to share your memories.

Send flowers to the Deno family.