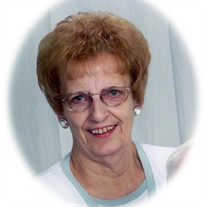 Norma J. Herron, age 85, of Brook, passed away on Sunday, January 2, 2022, at Iroquois Memorial Hospital in Watseka, IL. Norma was born in Paris, IL on December 25, 1936, the daughter of Clifford and Irma (Good) Maynard. Norma attended and graduated from Paris High School. Norma married Floyd Herron in June, 1981, in Paris, IL and he preceded her in death in 2018. Norma was a homemaker, taking care of her household and family. Prior to that she worked as a waitress. She was a member of the Christian Church of Morocco and the Nevins Christian Church. Norma liked to sew and cross-stitch. She also enjoyed going out for a nice meal. Her grandchildren were her life and she spent as much time with them as she could. Norma cherished her family, and they will miss her dearly. Norma is survived by her children, Kent (Gail) Sisson, Christie (Rick) Smart, and Scott (Kirsten Anderson) Sisson, all of Morocco, IN; grandchildren, Kelly (Kevin) Cochran of Rensselaer, IN, Cole (Jenn) Sisson of NY, Brandi Sisson of Chicago, IL, and Erika (Tyler) Logsdon of Demotte, IN; step-grandchildren, Mindy and Brice; great grandchildren, Tyler, Cody, Gabby, Ty, Evey, Chase, Kaci, and Kaylee; sister, Brenda (Dorley) Dodd of Pontiac, IL. She was preceded in death by her parents and her husband, Floyd. Friends may call on the family on Saturday, January 8, 2022, from 10:00 a.m. to 12:00 p.m. at Jackson Funeral Chapel of Rensselaer. A funeral service will be held immediately following at Jackson Funeral Chapel of Rensselaer at 12:00 p.m. with Rick Gerts officiating. Interment will follow at Oakland Cemetery in Morocco, IN. Memorials may be made to the Riley Hospital for Children in Indianapolis.

The family of Norma Joan Herron created this Life Tributes page to make it easy to share your memories.

Send flowers to the Herron family.