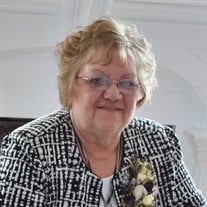 Norma Mae Hoeferlin, age 71, of Wheatfield, passed away peacefully at Franciscan Health, Lafayette on Saturday August 26, 2017. Norma, who was one of ten children, was born in her family home in Kersey, Indiana. She was the daughter of Edward and Reva (Stroup) Pierson, both deceased. Norma attended and graduated from Fair Oaks High School, the Class of 1964. On March 14, 1970, at the Barkley United Methodist Church in Barkley Twp, Rensselaer, Indiana, she married John William Hoeferlin, Sr., who survives. Together, they raised four children. Norma devoted her life to her husband, children and grandchildren. She enjoyed baking, needle point, crafts and sewing doll clothes. Her grandchildren were blessings to her, and she would enjoy sharing her time, talents and love with each and every one of them. The Christmas season and holiday were most special for her as she could be with all her family and friends, and shower her grandchildren with gifts and homemade goodies. Norma is survived by her loving husband, John, Sr.; four children, Angela (Andy) Nagel of Rensselaer, John, Jr. (Esther) Hoeferlin of Lafayette, William (Barbara) Hoeferlin of Heltonville, Indiana, and Adam Paul (Tina) Hoeferlin of Francesville, Indiana; five siblings, Wesley (Carleen) Pierson of Harlington, TX, Mike (Martha) Pierson of Havana, Illinois, Roger (Janet) Pierson of Wolcott, Indiana, Tom (Joyce) Pierson of Fowler, Indiana, Sherry Pierson of Francesville, Indiana, 14 grandchildren and seven great-grandchildren. She was preceded in death by her parents, two sisters and two brothers. Friends are invited to visit with her family on Wednesday, August 30, 2017 from 3:00 - 8:00 PM at the Jackson Funeral Chapel of Rensselaer. Funeral services will be held on Thursday, August 31, 2017 at 10:30 AM at St. Augustine Catholic Church in Rensselaer with Father Rick Nagel officiating. Cremation rites will follow. Memorials may be made to the Giving Tree at St. Augustine Catholic Church or Birthright of Rensselaer.

Norma Mae Hoeferlin, age 71, of Wheatfield, passed away peacefully at Franciscan Health, Lafayette on Saturday August 26, 2017. Norma, who was one of ten children, was born in her family home in Kersey, Indiana. She was the daughter of Edward... View Obituary & Service Information

The family of Norma Mae Hoeferlin created this Life Tributes page to make it easy to share your memories.

Send flowers to the Hoeferlin family.