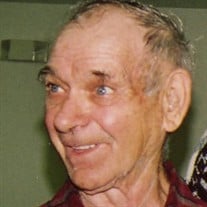 Norman E. Prohosky, age 93, passed away on Monday, March 25, 2019 at George Ade Memorial Healthcare. Brook, Indiana. Norman was born March 15, 1926 in Lincoln Township, Newton County, Indiana, the son of Joseph and Clara (Studer) Prohosky. He was a lifelong resident of Lincoln Township, Roselawn, Indiana. Norman began actively farming at the age of 15 after his father’s health began to fail. Along with crop farming he raised cows, pigs and chickens. He had a true love of animals and cared for them lovingly. Norman could be found to be stubborn but enjoyed working with and caring for his family and friends. He was a genuine farmer at heart. On June 22, 1974, in Rensselaer, Indiana Norman married Carol (Jensen) Scripter who passed away September 22, 2014. Surviving are two nephews, Kenny (Janet) Prohosky and Randy (Eva) Prohosky, two step-sons, Mike Scripter and Steve Scripter, a step-daughter, Katherine Measaw and his best friend Bob. Norman was preceded in death by his parents, Joseph and Clara, his wife Carol, and four brothers, Lennard, LeRoy, Robert and Marvin Prohosky. A Celebration of Life will be held on Friday, March 29, 2019 with visitation from 10:00 to 11:00 a.m. and services at 11:00 a.m. at the Jackson Funeral Chapel in Rensselaer. Pastor John Hostetter officiating. Memorials may be made to Friends of the Jasper County Animal Shelter and mailed to The Jasper Newton Foundation, P.O. Box 295, Rensselaer, IN 47978 or mailed to the Jasper County Animal Shelter, 2430 W. Clark Street, Rensselaer, IN 47978.

The family of Norman E. Prohosky created this Life Tributes page to make it easy to share your memories.

Send flowers to the Prohosky family.