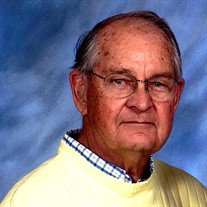 Otto Phillips “Phil” Wood, 101, of Rensselaer, Indiana, passed away Monday, March 1, 2021 at Parkview Haven in Francesville. Phil was born in Bloomington, IL on November 19, 1919, the son of Phillips Sawyer and Elsie Pearl (Otto) Wood. Phil moved to Rensselaer from Bloomington, IL in 1936 and graduated from Rensselaer High School with the Class of 1938. He then attended Northwestern University College, Evanston Collegiate Institute, and the University of Illinois. In 1941, Phil enlisted in the US Army and as it turned out, that was 5 days prior to the attack on Pearl Harbor. Following 12 weeks of Army training, he was assigned to Task Force 6968 for the construction of the ALCAN Military Highway, which is today called the Alaska Highway. After 6 months on this assignment, he returned to Wyoming for additional training. Phil’s next assignment was with the 305th Bombardment Group (H), Eighth Air Force in the European Theater of Operations as a Captain. Following WWII, Phil married Shirley C. Carlberg, of Elizabeth, New Jersey, on October 5, 1946 and they shared 64 ½ wonderful years and three sons together until she preceded him in death on May 17, 2011. Phil operated a seed business in Rensselaer for 32 years. He also attained his private pilot’s license and took great joy in taking countless people up for their very first plane ride. Phil was a member of the First Christian Church of Rensselaer. Phil was active in his community. He was a James E. West Fellow (Boy Scouts of America), a St. Joseph College Fellow, member of the Rotary Club, Trustee for Benjamin Harris Homes for 30 years, and the first recipient of the Rensselaer Alumni Association’s Community Service Award in 1992. Of all Phil’s accomplishments, his greatest love was that of his family. Phil is survived by his children, Richard Phillips (Wendy) Wood of Sutton, AK, Jeffrey (Dianna) Wood, and Bruce K. (Sheila) Wood, both of Rensselaer, IN.; 4 grandchildren, Michael, Sarah, Megan, and Laura; 2 step-grandchildren, Jonathan and Travis; 7 great-grandchildren and 4 step great-grandchildren. Phil was preceded in death by his parents and one sister, Mary Anne Wood. As per Phil’s wishes, there will be no visitation and only private graveside service for family only. Jackson Funeral Chapel of Rensselaer has been entrusted with the arrangements. In lieu of flowers, memorial contributions may be made to the Good Samaritan Food Pantry of Rensselaer or the charity of your choice.

The family of Otto Phillips Wood created this Life Tributes page to make it easy to share your memories.

Send flowers to the Wood family.