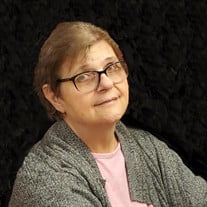 Pattie Kazmierski, age 66, or as she was known by her children, grandchildren, the devil, various members of the police department, and other enemies of the state, “Big Pun”, passed away at her home in Wheatfield Indiana on the 28th of December 2020 after fourteen years of kicking cancer’s a**. She was born in Schenectady, New York on the 6th of March 1954 to her loving parents Howard and Trudy Mann, Patti was the third oldest of a small horde of eight. Growing up during the Sixties and Seventies, Patti was a flower child and vagabond. Pattie was a passionate individual who poured herself into her various hobbies. She was an avid reader and fantasy lover, even when in the truck Patti would listen to books on tape. She loved to ride motorcycles with her husband. Her cooking and baking skills were unmatched, something she prided herself on. She often won baking contests and flexed her skills at Christmas parties, always touting just how little she spent making such lavish cuisine. Her true passion was sewing and quilts. When she first was diagnosed with cancer, she went about sewing each family member and loved one a quilt tailored to their personality and liking, giving each family member a personal treasure to remember her by. Such a gift is more precious now than ever before. Pattie is survived by her husband Michael Kazmierksi of 40 years, a relationship that truly set a high bar for all that witnessed their love. Patti and Mike were inseparable in every aspect of their lives and as they traveled the entire continental US as truckers. Together they experienced everything this crazy country- and life- could offer them on the open road. They shared the burden of family together, where they were a unified front against the craziness that is their children and grandchildren. All of life’s joys, tasks, and struggles were fought together, including the struggle of her final days. In addition to her husband, Pattie is survived by her three children, Stephanie (Todd) Granato, Jennifer Park, and Louis Kazmierski for whom she will be remembered as a strong disciplinarian, her five grandchildren Branden, Kayelin, Savannah, Alicia, Jaxston; one great- daughter McKinley; who will remember her as a doting and thoughtful grandmother, and her siblings Debi Rochester, Robert “Bo” Mann, Elizabeth (Ignacio) Perez, Mannette Mann, and Timothy (Julie) Mann. Pattie is preceded in death by her mother and two brothers, Howard and Kenneth Mann. It goes without saying that Pattie will be missed. She sprinkled all our lives with spunk, tenacity, and her enduring spirit. She would have wanted us to celebrate who she was, rather than mourn her loss. Pattie’s wake will be held at the Jackson Funeral Home in Demotte Indiana this Thursday 31st of December 2020. Due to COVID-19 restrictions, services will be private. She requested that those who wish to pay their respects donate to the Franciscan Health Burrell Cancer Center of Crown Point, Indiana in her name.

Pattie Kazmierski, age 66, or as she was known by her children, grandchildren, the devil, various members of the police department, and other enemies of the state, &#8220;Big Pun&#8221;, passed away at her home in Wheatfield Indiana on the 28th... View Obituary & Service Information

The family of Pattie Kazmierski created this Life Tributes page to make it easy to share your memories.

Pattie Kazmierski, age 66, or as she was known by her children,...

Send flowers to the Kazmierski family.