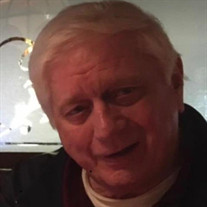 In the early morning hours of Monday, August 3, 2020, Paul Henry Voss, loving husband, father, grandfather, and great-grandfather, passed away at the age of 80, at home in DeMotte, with his wife, Peggy at his side. Paul was born August 23, 1939 in Harvey, IL to George and Anne (VanderBilt) Voss. He was a devoted family man, proud railroad retiree, avid story teller, and a friend to many. Paul was a self-proclaimed, “Mama’s Boy”, he spent his early childhood in South Holland, IL but during high school he moved throughout the Midwest as his dad followed his career with the Rock Island Railroad. Paul graduated from Shawnee Mission High School in Shawnee Mission, Kansas, Class of 1957. He moved back to South Holland in 1959 where he met his wife, Margaret “Peggy” O’Brien, at a PX dance at Thornton High School. He told his aunt that very night that he met the girl he was going to marry. Paul and Peggy were married in 1961 and raised 2 daughters in Thornton, IL. Paul followed in his father’s footsteps and worked for the Rock Island Railroad for 37 years. After his retirement in 2000, he enjoyed time with his family, horse racing, fishing, and most notably time at home, which he referred to as “909 Breezy”. There with his TV, he named Curtis, he spent many hours arguing politics, cheering on the Chicago Bears & the Chicago Cubs, and later in life, enjoying the adventures of Matt Dillon on Gunsmoke. It is rumored he may have had a small crush on Miss Kitty. When not at home, Paul spent many afternoons at the Thornton American Legion entertaining the retired crowd with his colorful stories, shots of Canadian Mist, and playing his favorite David Allen Coe song, “You don’t have to call me Darlin, Darlin” on the jukebox. Paul lived his life fully with a fierce love for everyone around him. He had a true passion for people, all people. His brother-in-law, Rich, wrote this about him: “I don’t think you ever met a stranger you didn’t like & didn’t get to know in a few minutes. You inspire me with your love of life & your curiosity about everyone you met.” Paul will be missed by so many, but his love and stories will live on in our hearts & memories. Paul is survived by his wife of 58 years, Margaret “Peggy” Voss, daughters: Paulette (Jim) Govert, Pamela (Bob) Pechal; grandchildren: Melissa Crose, Rebecca (Timothy) Frye, Trey & Bryan Pechal; great-grandchildren: Timothy, Joshua, Olivia, and Zachary Frye; brother, Gene Voss; sister, Georgian (Elmer) VanDrunen; sisters-in-laws, Kathe (Derrill) Bibby, Mary Puglise, Shirley (Rich) McGrath, Sue (Don) Kennedy, Vicki O’Brien, and Patsy Rozek, furry friends: Molly & Minnie; numerous other extended family members. He is preceded in death by his parents; daughter, Patricia Elanne; sister, Marlene (the late, George) Gibson; parents-in-law, Eleanor & Arthur O’Brien; brother in law, Bill O’Brien, and friend, George (Lefty) Rozek. Friends and family may visit, while wearing masks and practicing social distancing, at Jackson Funeral Service of DeMotte on Friday, August 7, 2020 from 2:00 to 7:00 PM. A Funeral Service will immediately follow at Jackson Funeral Service at 7:00 PM with Pastor Jim Alblas officiating. Interment will take place at a later date at Plummerville Cemetery in Fennville, Michigan. In lieu of flowers, memorial contributions may be made to Boy’s Town in Paul’s name.

In the early morning hours of Monday, August 3, 2020, Paul Henry Voss, loving husband, father, grandfather, and great-grandfather, passed away at the age of 80, at home in DeMotte, with his wife, Peggy at his side. Paul was born August 23,... View Obituary & Service Information

The family of Paul Henry Voss created this Life Tributes page to make it easy to share your memories.

Send flowers to the Voss family.