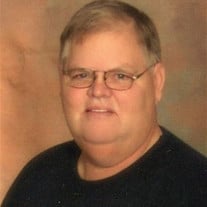 Ralph E. Black, 66, of Moore Haven, Florida passed away June 5, 2018 at Trustbridge Hospice, Boynton Beach, FL. Ralph was born in LaPorte, Indiana on July 17, 1951, the son of the late James and Hildreth (Johnson) Black. He was raised in Rensselaer, graduating from Rensselaer Central High School with the Class of 1970. Ralph lived in Rensselaer until moving to Fowler, Indiana in 1977, where he was employed at the former Schumacher Electric and later at Quality Decorating both of Fowler. He returned to Rensselaer in 1990, working at Rensselaer Plastics where he was a machine mechanic. In 2000 Ralph moved to West Lafayette, Indiana where he resided until moving to Florida in 2014. Ralph will be missed dearly by his companion of many years, Jo Ellen Crain of Moore Haven, FL; his children, Sandra Ann Isabell of Fowler, IN, Ralph Edward (Julie) Black, II of DeMotte, IN and Michelle (Michael) Pennington of Connecticut; five grandchildren; and his siblings, Paul (Deana) Black, Jackie (Steve) Martin and Dennis (Judy) Black all of Rensselaer, IN and Donna (William) Wiggam of Carmel, IN and a sister-in-law, Laura Black of Rensselaer, IN. In addition to his parents, Ralph was preceded in death by an infant daughter, Janice Lee Black, and a brother, Larry Black. A Celebration of Life for Ralph will be held at the American Legion Post # 29, 1565 N. McKinley Ave., in Rensselaer on Saturday, June 23, 2018 from 12:00 to 4:00 p.m. (CDT). When attending the celebration the family invites you to please bring a covered dish to share. Those wishing to do so may make memorial contributions to Riley Hospital for Children c/o Riley Children’s Foundation, 30 S. Meridian St., Suite 200, Indianapolis, IN 46204-3509. Jackson Funeral Chapel of Rensselaer is honored to assist the family with arrangements.

Ralph E. Black, 66, of Moore Haven, Florida passed away June 5, 2018 at Trustbridge Hospice, Boynton Beach, FL. Ralph was born in LaPorte, Indiana on July 17, 1951, the son of the late James and Hildreth (Johnson) Black. He was raised in Rensselaer,... View Obituary & Service Information

The family of Ralph E. Black created this Life Tributes page to make it easy to share your memories.

Send flowers to the Black family.