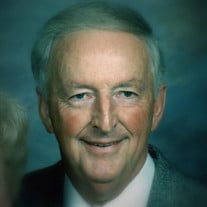 Dr. Raymond F. Ooms, age 85, of DeMotte, IN passed away at St. Anthony Hospital on Friday, December 22, 2017. He was born August 19, 1932 in Munster, IN to Edward and Grace (Klooster) Ooms. Raymond graduated from Illiana Christian High School, earned a bachelor’s degree in biology at Calvin College, and graduated from Indiana University with a doctorate of dental surgery. He married the love of his life, Carol (Homan) on August 10, 1954 in Kalamazoo, MI. Raymond was the first dentist in DeMotte and retired after serving the community for 40 years. He is a veteran of the U.S. Air Force, a member of Immanuel United Reformed Church of DeMotte, served on the DeMotte Planning Commision, and was a member of the Gideons International, Midwest Navioneers, and an elder in his church. Raymond is survived by his wife, Carol Ooms of DeMotte, IN; children: Scott (Vikki) Ooms of DeMotte, IN; Kevin (Joni) Ooms of DeMotte, IN; Lisa (Don) Hoekstra of DeMotte, IN; Stacey (Rudy) Tolkamp of DeMotte, IN; and spouse (Kalli) of deceased David Ooms; 13 grandchildren and 13 great-grandchildren; sister, Janet Musch of Ohio. Raymond was preceded in death by his parents, Edward and Grace; son, David Ooms and twin brother, Robert Ooms. Friends may call at Jackson Funeral Service of DeMotte on Tuesday, December 26, 2017 from 2:00 to 8:00 PM. A Funeral Service will be held at Immanuel United Reformed Church of DeMotte on Wednesday, December 27, 2017 at 10:30 AM with Reverend Thomas Wetselaar officiating. Interment will be at Holland Cemetery. Memorial contributions may be made to DeMotte Christian Schools or Gideons International. To send flowers or share a memory with the Ooms family, please visit www.jacksonfuneral.com

The family of Dr. Raymond F. Ooms DDS created this Life Tributes page to make it easy to share your memories.

Send flowers to the Ooms family.